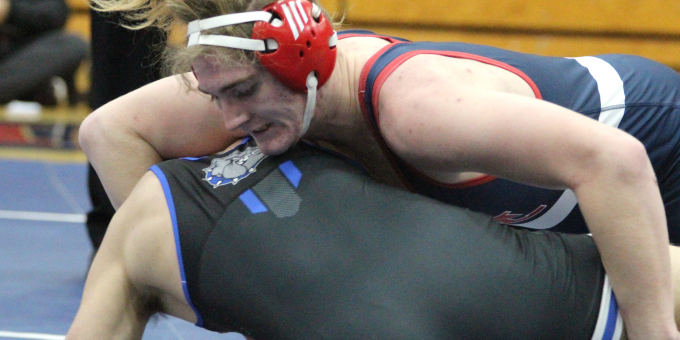 BEDFORD – When he finally fired, when Gunner Connaughton released from his cautious safety mode and pulled the trigger on his target, he hit the bull’s-eye. Nothing is sweeter than victory on Senior Night, and Bedford North Lawrence’s best upperclassman walked away with the best of memories.

Connaughton, one of four seniors making their final appearances in BNL Fieldhouse, exploded for a pin triumph on Thursday night to post one of the few highlights for the Stars. Columbus North, making huge strides up the sport’s ladder of pecking order and program reputation, flashed its muscle during a 63-15 team win that dampened the celebration.

For Connaughton, who missed five matches (including three multi-team tournaments) while recovering from a left knee injury, the only thing he could control was his match. And he took control, after a slow first period of pawing and clawing, with a pin late in the second period in his home farewell at 195 pounds. He caught North’s Bryce Abner for a pin at 3:56 while improving to 15-4 this season.

“I hope that’s a good lesson for him, going into the sectional,” said BNL coach Chris Branam, who just welcomed a newborn into the family. “He opened up and trusted his offense, and he immediately took the guy down and pinned him. At first he was wrestling a little cautious. When he let go of that and committed, good things happened.”

Connaughton admitted some nervousness, understandable after escorting his family to the center of the mat during pre-match introductions.

“Leaving tonight on a win is relieving, to say the least,” he said. “It’s very stressful, it’s like make or break. You work so many years in wrestling, and you see the outcome in every match. If you don’t get better, if you don’t wrestle well, you see all the aspects.”

Connaughton saw too much inaction during his time on the sideline. He accepted the temporary role as a morale leader and cheerleader, but that’s not his primary function.

“It was frustrating,” he said. “It really hurt me to watch my team fight on, and I couldn’t be there with them.”

The Stars could have used more to cheer about. The only other wins were recorded by Jorj Filler (now 30-8 after a 5-2 win over Joesph Cloud at 120) and Junior Arellano (pinning Cody Thurnall in 2:21 at 285). The Bull Dogs had seven pins (plus four forfeits) to pile up the points.

“Junior has really proven himself this year,” Branam said. “It’s not easy, being a freshman in the big weight class. A lot of guys grow into that, they don’t start their career as a big guy., But he’s willing to take on anybody. He has that patience. He has the mindset to stick with it.”

The Stars will return to action in the sectional at Southridge on Jan. 29.