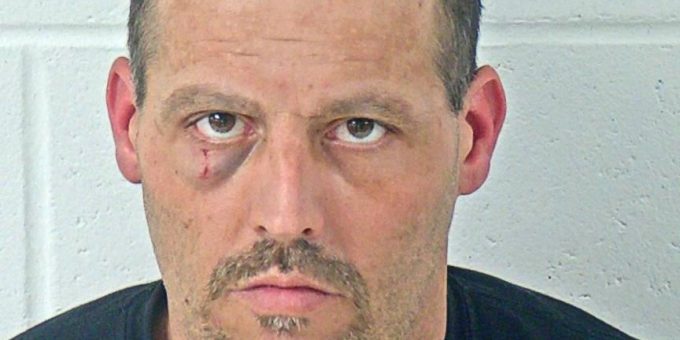 BEDFORD – A Bedford man was arrested Wednesday morning after he fled the scene of a property damage accident.

Police arrested 40-year-old Matthew Jeter, on charges of operating a vehicle while intoxicated, OWI with a prior conviction, OWI endangerment, possession of meth, possession of marijuana, and leaving the scene of a property damage accident.

On Wednesday morning, Bedford Police officers were called to Advanced Auto Parts on 16th Street about a theft. The caller advised that a male who had stolen from the store was driving a black Chevrolet Silverado and was possibly intoxicated.

One officer went to the auto part store, while others began looking for the vehicle. The store employee was able to provide the license plate of the vehicle which was registered to Jeter.

Police then received information that Jeter was at Stone City Collision, was about to leave, and appeared to be intoxicated.

Officers found Jeter’s truck on the sidewalk in front of 1219 L Street. Jeter was behind the wheel.

Jeter denied stealing anything from Advanced Auto. However, police did locate a bottle of Lucas Oil Transmission Treatment which was one of the items allegedly taken from the parts store. Store employees told police as long as the item was returned they would not file theft charges.

While talking to Jeter, police were alerted that Jeter had collided with a street sign before being found by police. An officer located the street sign at Fairgrounds Lane and M Street on the ground. The mirror to Jeter’s truck was found near the sign.

During a search of Jeter’s truck, police found marijuana and meth.

Jeter was arrested without incident.