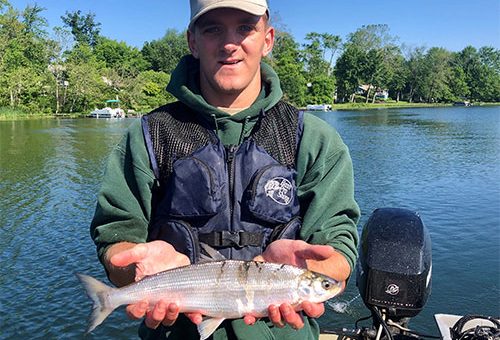 INDIANA – A lesser-known Hoosier fish is a cisco, the only cold-water fish species native to Indiana’s glacial lakes. As early as 1900, cisco could be found in 45 different glacial lakes in Northern Indiana, but decades of cold-water habitat loss have reduced that to seven lakes.

Cisco (Coregonus artedi) is the only native fish from the salmon family found in Indiana waters outside of Lake Michigan. It is a coldwater species that inhabits waters as far north as Canada and as far south as the upper Midwestern United States. Cisco is a small and slender, silver-colored fish. They feed primarily on zooplankton, a diverse group of microscopic animals that live in aquatic environments. In Indiana, cisco grows to 7 inches by age 2, 12 inches by age 4, 15 inches by age 6, and they have been known to reach 19 inches at around 10 years of age.

The glacial lakes of northern Indiana represent the southernmost extent of cisco’s range in North America. Glacial lakes are lakes formed by receding glaciers and water from melting glaciers. Only about 24% of Indiana lakes, primarily in the northern glacial lakes region, provide late-summer coldwater habitat (≤ 68°F and ≥ 3.0 mg/L dissolved oxygen) suitable for cisco.