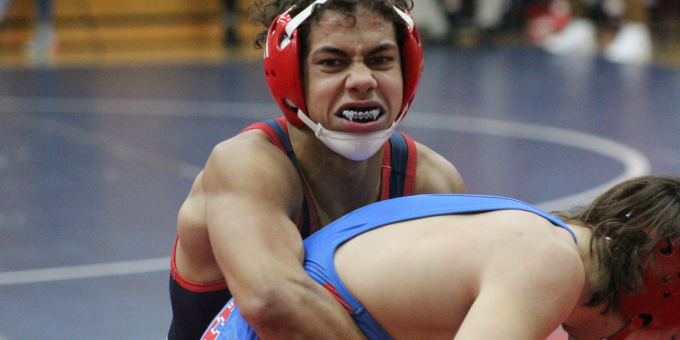 Childs fell to Seymour’s Dane Botkin by an 18-1 count in the semifinal, but he bounced back with wins over Columbus East’s Dominic Baker (pin in 2:21) and Jeffersonville’s Sebastian Berry (20-11 major decision).

“I’m very happy with how we did as a team,” BNL coach Chris Branam said. “Patrell of course is a standout as our highest placer on the day, and with him just being a freshman that bodes well for his future. I’m glad he was able to put together a performance like he did.”

Filler (30-10) lost Floyd’s Vince Kessinger in the semifinal, then won his consolation match with Rolondo Baltazar (pin in 3:56). Nelson (25-12) suffered a 16-0 loss to East’s Nathan Anderson in the semifinal but rebounded to pin Jennings County’s Nick Cortes in 55 seconds in the consolation.

Powell (18-20) went 2-2. He won his quarterfinal bout with Jennings County’s John Troupe by pin in 1:52, and also claimed his consolation clash with Seth Goodman (a pin in only 19 seconds). Connaughton, making his return from injury, posted a consolation win over New Albany’s Brian May (pin in 1:37).

BNL’s Brax Huber was fifth at 138 with two wins as he trapped Jeffersonville’s Nizaiah Carr in 3:37 in the quarterfinal, then later topped Carr again in the fifth-place match.

“The progress as a team is apparent,” Branam said. “Last year, we only scored 74 points as a team and finished dead last. This year, we scored 91 points and got to 6th place with a younger group than we had last year. Last year, we had seven wrestlers place in the top six. This year, we had nine. This isn’t the kind of leaps and bounds progress, we may hope to see, but it shows a trajectory that I believe will continue for years to come. When you factor in all but two of those nine placers are underclassmen, the future looks bright.”

The Stars will host Columbus North on Thursday.