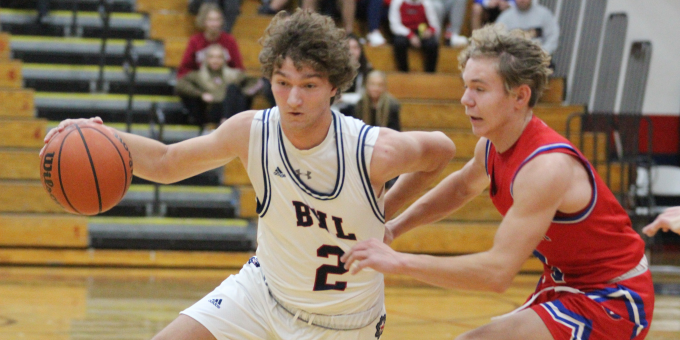 BEDFORD – The number jumps off the page, demanding attention like a police car’s flashing lights on a dark highway. Jennings County exploded for 101 points during a victory over Madison. That total is rare, impressive and scary as Bedford North Lawrence prepares to make the journey to face the potent Panthers.

Put 101 in perspective. That’s the first time since the 1995-96 season (109 against Austin) for Jennings to reach triple digits. BNL’s last time to hit that mark? 105 against Edgewood in 1989-90. Everyone remembers that team, of course. The Stars, who play much more deliberately in today’s era, now need two games to hit that total, and Jeff Hein’s head would explode if BNL ever allowed that many points.

But that also points to Jennings County’s potential. The Panthers (9-3) have four starters averaging in double figures, and they will fire weapons from all angles against the Stars (5-4 with a four-game winning streak) during Saturday night’s Hoosier Hills Conference collision.

With veterans in the lineup, with point guard Keegan Manowitz, 6-8 center Jacob Vogel, with wings Owen Law and Carson McNulty all totaling 11 points over game, Jennings has firepower. The Panthers have been over 80 points three times this season.

“When they get going, they can put up points in a hurry,” Hein said. “It’s a very big challenge. They have a kid in Manowitz who can stretch the floor. They hit 13 3-pointers against Brownstown (a 75-66 win), they pounded it into Vogel against North Harrison (a 41-40 triumph), so they have many ways they can play. They have so many options. They have different things they can do.

“We’ll have to play exceptionally well to stay in the game, give ourselves a chance to win.”

BNL did exactly that during last season’s clash at BNL Fieldhouse. Hein rated the performance an 11 on a 10 scale as the Stars posted a 62-52 win. Ben Cosner had 16 points and Colton Staggs came off the bench for 12. BNL had only 8 turnovers, gave up only 6 points in the second quarter, and JC was only 8 of 24 from long range. Manowitz had 20 points for the Panthers.

Jennings will look to exploit the size advantage with Vogel, who will tower over the smaller Stars.

“There will be that, with the size we are,” Hein said. “That’s just part of it, with the deck we’re dealt. The kids are playing really well.”

BNL’s counter will be ball control and penetration with Colten Leach (14.3 points) and Staggs (12.2). The Stars will need to keep the score far below JC’s usual total (66.6). The Stars are averaging only 46.7 per game, but they’ve won five of their last six since Leach’s return.

“Bedford is playing well right now,” JC coach Josh Land said. “We will have to do a great job containing Leach and Staggs. We will have to make them honor Vogel inside and make them play at a faster tempo then they prefer.”

BNL is currently tied atop the HHC standings at 1-0, with the league race just starting as the Stars chase their first league title since 2011.

Last meeting: Last year at BNL, the Stars prevailed 62-52. Ben Cosner had 16 points for BNL, while Keegan Manowitz had 20 for the Panthers.

Game notes: BNL has won three of its last four road games in the series. The Stars are chasing their first HHC title since 2011.