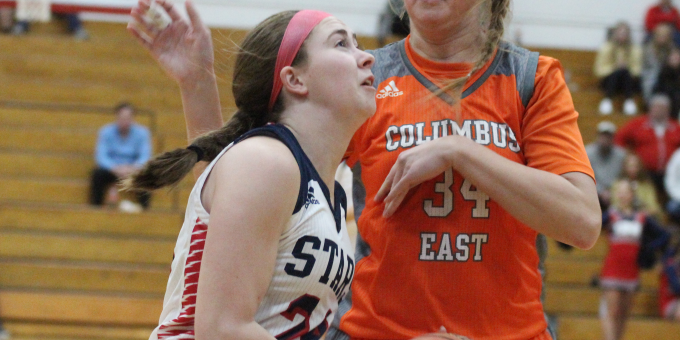 BEDFORD – Without expectations, disappointment doesn’t exist. Perhaps some can just slink and skulk through life, sidestepping sorrow by avoiding goals, but that’s not Bedford North Lawrence basketball. The Stars shoot for the stars, so the fall from the sky is hard.

The level of letdown is still measurable following BNL’s loss to Columbus East in the huge Hoosier Hills Conference showdown on Tuesday night. No.2 BNL took dead aim at claiming the league championship, and failure wasn’t even considered. When East celebrated its 58-51 victory, the Stars shed tears and showed the impact of the loss: depression, gloom, heartache.

The question is how BNL responds. With apathy or anger? Slumped shoulders and a lack of energy and psyche, or a hunger and fire to vent on the next opponent? As the Stars (16-2) prepare to host Floyd Central (6-10) on Saturday night, BNL coach Jeff Allen believes he knows the answer.

“It’s life lessons,” he said. “How do you recover from disappointment? There’s two ways to do it. There’s wallowing in the misery, or standing up and fight. We typically stand up and fight to play pretty well. I think that’s what we’ll do.

“There’s always times in a season when you don’t feel like you played to your level. And we’ve had that in the past. Looking at past circumstances, our teams have come back and played really well. You have to trust what you teach your kids.”

If that’s the case, the Highlanders should be concerned. If they catch the Stars in unmotivated mode, they could add to BNL’s misery index. If the Stars are inspired and stimulated, they could suffer. BNL’s defense can reduce the best to rubble, and the Highlanders are averaging only 40.8 points per game. They’ve been held under 35 five times. Part of that is their deliberate pace, which can test defensive patience.

“They’re very disciplined,” Allen said. “If you don’t play well, they can hang around. They’re all about taking quality shots, and however long it takes to get that, they’re going to do that. Hopefully we can make them uncomfortable.”

The Stars will challenge the comfort zone with backcourt ball pressure. Madisyn Bailey had 8 steals against the Olympians, Karsyn Norman is the team leader at 3.3 steals. BNL’s shooting was suspect against East, but the defensive tenacity in the second half was intense as East totaled 26 turnovers.

“I was really proud of the effort,” Allen said. “Shooting, there’s only so much we can do. That falls on the kids. Our decision making in certain situations is something we need to work on. That would have helped at certain times. But I really like the way we’re defending the perimeter. The thing that concerns me is Floyd does have size. So giving them easy baskets is a fear because of the size issue.”

The Highlanders will feature the veteran guard tandem of Keegan Kaiser and Kendall Brown, and the imposing presence of 6-2 junior center Callie Celichowski. That will be another tall task for BNL senior Carlee Kern, who has drawn the short straw to tackle taller post players all season.

BNL won last year’s clash at Floyd by a 57-37 count, taking control with an 18-0 run in the second quarter. Irye Gomez and Chloe Spreen paced the Stars with 17 points each, while Brown got free for 19 points for the Highlanders.

BNL can still win a share of the HHC title, but will require help. The Stars (4-1 in the league) must first conquer Floyd, then hope East stumbles against either New Albany (at home at Saturday) or Jennings County (on the road on Jan. 20).

Last meeting: Last year at Floyd, the Stars went on an 18-0 run in the second quarter while conquering the Highlanders 57-37. Irye Gomez and Chloe Spreen had 17 points each for BNL. Kendall Brown totaled 19 points for Floyd.

Game notes: Floyd Central is chasing its first winning season since 2016-17. BNL can still claim a share of the Hoosier Hills Conference title with a win over the Highlanders, plus a Columbus East loss against New Albany or Jennings County.