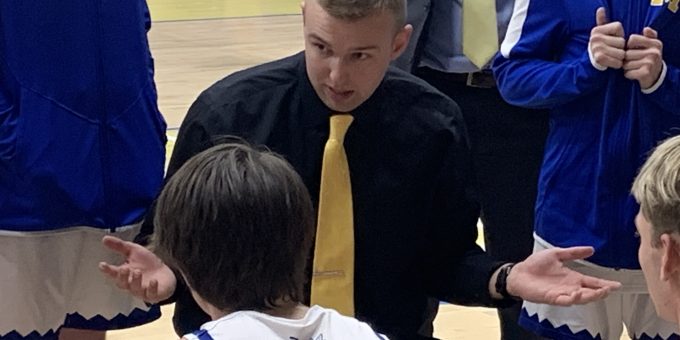 BEDFORD – Adversity, defined as difficulty or misfortune, has been sitting alongside Jackson Ryan on the Mitchell bench since he took over the program. Named as head coach in the early stages of the virus explosion, forced to prepare for his first season with virtual meetings replacing gym preparation, enduring two midseason program pauses. Nothing in the New Coach Handbook about dealing with that.

And now, on the eve of the renewal of the Lawrence County rivalry with his alma mater, more bad news. Authors have waxed poetic about the virtues of battling through suffering and tribulation. If true, Jackson has already earned enough character points to cash in on something valuable as he wades through this second year at the helm.

In his mind, the most treasured regular-season prize would be a streak-ending victory over Bedford North Lawrence. That would make all the struggles worthwhile.

Ryan’s Bluejackets (6-7) will seek to end BNL’s dominance when they host the hot Stars (5-4) on Friday night. BNL’s current four-game run pales in comparison to its 35 consecutive wins in the neighborhood clash, and its 46-1 overall lead in the series. That’s a gigantic mental hurdle to overcome, and now Mitchell must attempt to end The Streak without its leading scorer.

Mitchell junior Kade Wigley will miss the remainder of the season after being declared ineligible. He was averaging 13.5 points per game, and his absence has forced the Bluejackets to adjust course midstream, to recalibrate the offense while accounting for the void. More adversity, more soul testing for the 27-year old coach and his squad. Turn to Chapter 2 in the handbook, which begins “the best laid plans of mice and coaches . . .”

“Any time you lose a great player, it hurts. It was losing a big piece of the puzzle,” Ryan said. Then he quickly refocused ahead rather than dwelling on the rear view. No time for sympathy, which is not forthcoming. “But we have the depth, the firepower, the weapons. It won’t be just one person, it will have to be by committee. We’ve adjusted in the two games so far. We’re still a force to be reckoned with.”

Mitchell’s new-look lineup started successfully, a 48-44 win over Paoli. The next night, the Jackets fell 56-40 at South Central. And that weekend is a snapshot of the season thus far: a 4-1 start, five straight losses, unpredictable.

“We still haven’t played a complete game yet, and I’m sure every coach in the state can say the same thing,” Ryan said. “If we can play a complete game, hang around and have a chance to win it, we’re a confident group of kids. You can see the inconsistency we have, but if we’re the team I think we are, what we’re capable of being, we’re tough to beat when firing on all cylinders.”

As Mitchell lost a key piece, BNL got one back. Since junior Colten Leach retuned from offseason knee surgery, the Stars have won five of their last six. They still struggle on the offensive end, which is perplexing when considering Leach was the scoring leader last season and has assumed the spot once again. But they’ve been destructive on defense, allowing 40 or fewer points in three straight games. BNL ranks 45th in the state (and 12th in Class 4A) while surrendering only 44.3 points per game.

“I’m happy with the way we’ve played defense all year long,” BNL coach Jeff Hein said. “We still have to get going offensively. We rely too much on our defense to win games. We have to find a way to get the ball in the basket. It’s like a broken record. We have to make shots, which will make things a lot easier. We’re trying to find a way that works for us.”

That’s the key talking point of this latest clash. Can Mitchell’s reshuffled attack find cracks in BNL’s defensive wall? That will require additional production from senior guard Andrew Shepherd (12.0), senior Nick Mundy (9.6 points, 5.2 rebounds, 3.3 assists) and more from some of the role players who must now fill the third threat position.

“They have played really well, they have played hard, they have played together and looked good offensively,” Hein said after he scouted the Paoli win. “Then on Saturday they looked the opposite. If the ball goes in the basket, you look good. So they’re like us in the fact they’re a little inconsistent on the offensive end. But they have the capability.”

BNL will counter with its guard-heavy attack, centered around Leach (14.3) and junior Colton Staggs (12.2). While the Stars are averaging only 46.7 points and shooting mediocre percentages, their tempo control has been fascinating, and their ability to limit turnovers (8.5 per game) while dribbling the shine off the ball with their weaving and driving sets has been remarkable. Longer possessions and fewer shots amplify the misses, but the penetration deep into the paint causes Ryan some headaches.

“I love watching them play,” Ryan said. “It starts with Leach and Staggs, two great guards. I don’t think we’ve seen a 1-2 punch from guards like that this season. They control the tempo, they control the pace. They can slow you down, spread you out and get exactly the shot they want. And they surround them with good shooters. They pose a lot of problems for us. If we can’t keep them out of the paint, it will be a long night.”

Last year, Staggs came off the bench to score 10 points and spark a 15-1 run in the second half as the Stars pulled away to a 55-40 win. Jackson Miracle had 12 points, Leach added 11, and Mitchell shot only 31 percent. Mundy paced the Jackets with 8 points.

BNL’s last road trip in the series almost ended in disaster, barely escaping with a 56-55 victory. The Bluejackets owned a late lead, Michael Bell totaled 25 points, and Mitchell had two shots in the final possession to win. Mitchell’s only victory over BNL came in 1986.

Last meeting: Last year at BNL, the Stars rolled to a 55-40 triumph. Jackson Miracle had 12 points and Colten Leach totaled 11. BNL went on a 15-1 run to a 26-point lead in the second half. Nick Mundy had 8 points for the Blulejackets.