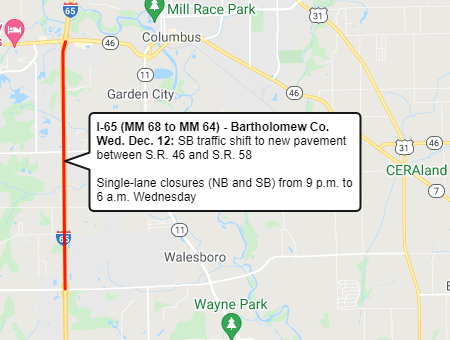 BARTHOLOMEW CO. — Indiana Department of Transportation contractor Force Construction plans to shift southbound traffic to new concrete pavement later this week in the I-65 construction zone south of Columbus. This will be the final shift to move traffic into its winter configuration.

Starting around 9 p.m. Wednesday (Jan. 12), the left lane will close in each direction of I-65. The southbound closure will take place near S.R. 46 and S.R. 58, while the northbound closure will occur near MM 66.5 and S.R. 46. Later in the night lane closures will be moved to the right lane in each direction. Once complete, southbound drivers will travel on the new pavement between S.R. 46 and S.R. 58, which will allow the contractor to complete bridge work at Opossum and Denois Creeks during the winter months. The traffic shift is expected to be complete by 6 a.m. Thursday.

This configuration will remain in place until mid-March or early April when all southbound traffic will be moved to the northbound side of I-65 via crossover. This is when major construction will resume in southbound lanes between S.R. 58 and S.R. 46, as well as asphalt resurfacing on I-65 from the Driftwood River Bridge to U.S. 31 at Taylorsville, and a deck overly on the I-65 bridge over S.R. 46.

The $65 million added travel lanes project is expected to be complete next fall, with additional work expected through 2023.