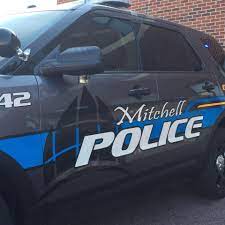 MITCHELL – On Saturday, Mitchell Police officers were alerted to a possible domestic fight in the 320 block of West Warren Street.

When officers arrived they found a male and female inside the home actively yelling and fighting.

Police knocked on the door several times but could not get anyone to respond.

Also in the home was 26-year-old Gage Leonard.

Both told police they were asleep when police arrived and were not arguing.

Police then asked if there was anyone else in the home and they both said no. Police did a protective sweep of the house and found no one else to be inside the residence.

While looking in the home police found several small baggies on a nightstand that contained crystal meth.

Leonard was detained and searched. Officers found a syringe in Leonard’s pocket.

Leonard asked to smoke a cigarette which the officer allowed but the officer had to retrieve the pack of cigarettes belonging to Edwards from the other room. While in that room police found pills and marijuana.