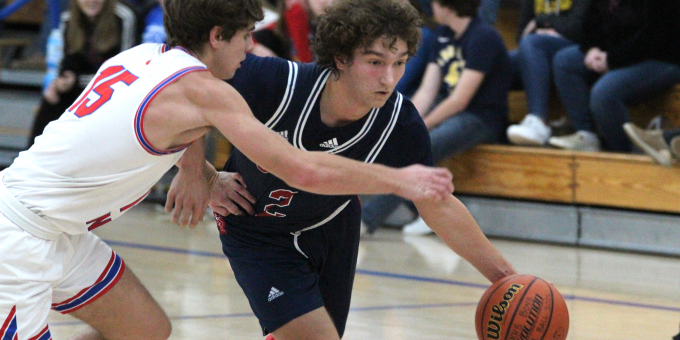 Down by a possession, in game where two points felt like 10, with the opponent owning the ball and setting the tone, everything had to play out in BNL’s favor. And it did. The play of decision started on the defensive end, a perfect rotation to clog the passing lane. The shot of ultimate consequence was sharp execution of a wing pass to a cutter in the lane, one of the few clean looks in a defensive, slog-in-mud grind.

The only highlight that mattered was the last one, as Colten Leach dropped a gorgeous floater off the glass while drawing a foul, converted the free throw, and propelled the Stars to their fourth straight victory.

Leach’s 3-point play with 22 seconds left proved to the the game-winner, and one of the rare exquisite moments in a battle that didn’t allow any beauty to shine through the grime, as BNL squeezed out a 34-33 win at South Knox on Saturday night. Leach finished with 14 points, although there were other heroes in the final minute that changed the course and the outcome.

So here is the scene: the Spartans had control, a 33-31 lead as BNL shifted into scramble mode, trapping and pressing the issue. Colton Staggs started the key play with a steal, picking off Dakota Candler’s pass from the left wing to the paint. Staggs took off for the other end and spotted teammate Trace Rynders in the left corner.

Rynders, who had already a hit a pair of fourth-quarter treys, faked another one, drove the baseline, and drew attention. He found Kole Bailey in the opposite corner, and Bailey rifled a bullet pass to Leach as he dove into the lane from the top of the key. Rise, bank, bucket and foul. Perfect.

“They lost me,” Leach said. “And I had a wide-open lane to the paint. It was a perfect pass that led me right to the lane.”

After Leach made the go-ahead free throw, South Knox (6-5) called timeout to diagram its response. But then the Spartans returned to the court and attacked, BNL had changed to a zone, causing some chaos, and the ball was fumbled out of bounds to BNL’s ownership with 12.2 seconds left.

Staggs got fouled at 8.6, but he missed the one-and-one (the only BNL miscue in the scenario). South Knox got the rebound and hurried to the other end, got disorganized, then called a timeout with 1 second left. After two more huddles to plot, the Spartans got Logan Fisher free at the top of the key, but his final shot (and his only attempt of the game) was short as BNL celebrated its third consecutive win in the series.

“Sometimes you have to grind it out, on the road in a tough atmosphere, find a way to get it done,” BNL coach Jeff Hein said. “We did it tonight. We kept our composure and handled things really well. We rolled with the punches and found a way.”

For all the late theatrics, BNL was in its testing predicament because of South Knox’s stout defense and stubbornness. The Spartans were ranked third in the state in points allowed and showed why. BNL’s offense was reduced to a standstill, with less excitement than watching a sunburn in slow motion.

“South Knox, besides Bloomington South, is the best defensive team we’ve seen,” Hein said. “They took our stuff away and we threw everything at them we had. We just couldn’t get going. I had a feeling, at some point, we’d have to speed the game up. We usually slow games down.”

BNL trailed at every quarter break. South Knox’s Jackson Thomas hit a buzzer shot for a 20-18 halftime edge, and the gap was still 23-21 after the third. That’s right, the teams combined for two buckets and six points in a quarter that should be erased.

Then, from those ashes, some offense. Rynders ripped a trey, Staggs dashed to a spinning layup following a Bailey steal, and BNL had a 28-25 lead with 6:20 left. That didn’t last as Candler, so smooth with a quick first step and finishing skills, scored three times, the last giving the Spartans their ill-fated lead with 1:50 left.

South Knox aided BNL’s rally with five turnovers in the final quarter, including the one that shot BNL to victory.

“Once we got the game speeded up, it was to our advantage,” Hein said. “We forced them into some turnovers, and that was the difference. Those were crucial. We made some defensive plays, and that’s what we are. This was a tournament-type game, the ones you have to win in March. You have to make the most of each possession.”

Kaedyn Bennett added 7 points for the Stars (5-4). Their patience on both ends was tested by South Knox’s ball-control strategy.

BNL will visit Mitchell on Friday.