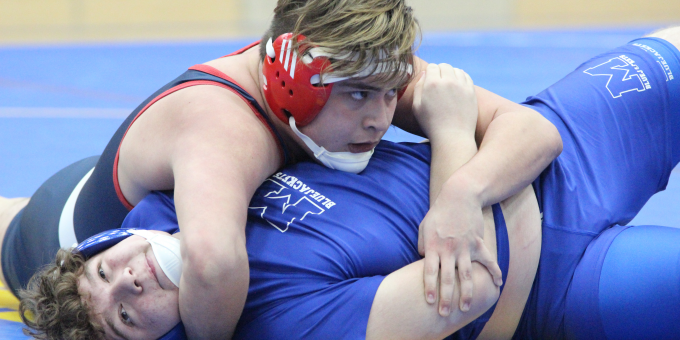 MITCHELL – The quick and the dead, Bedford North Lawrence was ultra-efficient and extremely deadly while smacking down Mitchell in the county rivalry match.

The Stars recorded six pins, all of them in the first period, while rolling to a 48-30 triumph over the Bluejackets on Thursday night. In a match that included seven forfeits and was concluded in 20 minutes, the Stars were dominant with one-move wonders for lightning-fast victories.

“As a coach, you want that attitude of having been there before,” BNL coach Chris Branam said. “Going out and pinning someone in the first period, you’re not jumping up and down, that’s what you do. You want them to have that belief in themselves, and they showed that. They believed they were going to dominate.”

Belief is one thing, proving it is another. The clock told the story. The fastest win was 29 seconds, the longest took 104 seconds. The referee barely broke a sweat. The rivalry between close county neighbors can be intense, but the Stars burst that bubble.

“Wrestling, when you step on the mat, you flip the switch and turn into an animal,” Branam said. “When you come off the mat, you turn back into a nice kid. During the match, we want to grind people in the mat. But we want to see Mitchell succeed, we want this to be even more intense.”

BNL did the bulk of the grinding.

BNL’s Jaxon Powell pounded down Corbin Peters in 1:22 at 160, Javier Paredes topped Christian Garcia in 1:12 at 220, and freshman Junior Arellano hammered Xander Payton in 1:39 at 285. Arellano’s victory was typical of the rest: probe a little, spot an opening, take advantage, end it in a hurry.

Mitchell’s lone win on the mat came at 152, with Jason Sweet stopping Mark Mason in 1:07.

BNL will send four participants to compete in the girls regional at Edgewood on Friday, then return the entire roster to action in a multi-team meet at Paoli on Saturday.