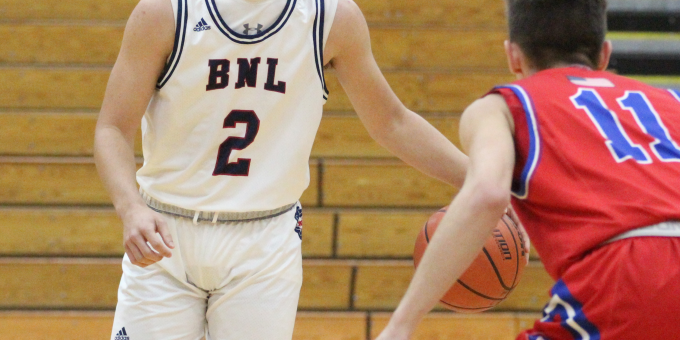 BEDFORD – Perfection is not attainable, according to NFL coaching legend Vince Lombardi, but in chasing perfection, excellence can be caught. And that captures Jeff Hein’s coaching philosophy: Pursue perfection, accept excellence.

During the last five games, since returning to full strength, Bedford North Lawrence has flashed its potential while playing an excellent brand of basketball. Toughness, defensive grit, possession value have been key as the Stars won four of those contests, culminating with a revenge victory and the title in the Danny Bush Classic.

Good enough? Not even close. Perfection remains the goal as BNL, back from a well-earned holiday break, heads into the new calendar year and approaches the season midpoint with a resolution to improve its offensive production. And that will be put to the test when the Stars (4-4) host feisty Evansville Reitz on Friday night.

Hein is a defense-first guy, always will be, and BNL has been remarkable (considering the short-coming of size) on that end thus far, allowing only 48.3 points and holding four opponents to 40 or fewer points. Now the goal, without sacrificing the effort on one end of the court, is to bring the offensive execution to an equal level of efficiency.

“Our big thing now is working on the offensive end,” Hein said. “At times we struggle on that end. We have to get the offense going and clicking. When your offense isn’t going, you put too much pressure on the defense. While we’re pretty good defensively, we need to improve on the offensive end.”

Some of the numbers are good. Junior guard Colten Leach has stepped into his expected leading role since his late debut following knee surgery, averaging 14.8 points after back-to-back outings of 20. Junior guard Colton Staggs has contributed 13.1, and BNL has been extremely protective of the ball, averaging only 8.4 turnovers during the last five games.

But other stats reveal issues, mainly the shooting percentages (41 from the field, 65 from the line) that have earned focus while BNL has totaled only 48.3 points per game. For a guard-centric team, those numbers are a little short of excellent. The Stars have spent more practice time working on shooting.

“They just have to believe in themselves, believe they can hit shots, get that confidence,” Hein said. “The offense will pick up.

“I like the approach the kids have. They’re having fun, enjoying the game and playing as well as we can expect them to play at this point in the year. We still have room for improvement, there’s no doubt about that, but I like the way we’ve played.”

The Panthers (5-2) will challenge BNL’s offensive patience and ballhandling skill. Reitz’s reputation starts with a 1-2-2 halfcourt trap that forces hurried decisions, creates a little chaos and some rapid-fire doubt. The Stars have already faced that defense this season, but Reitz will add imposing size and wingspan to the problem.

“We’ve handled it pretty well this year,” Hein said. “We’ve seen it a couple of times. We’re tweaking things as we go along, with that type of defense, but Reitz will make you play. They put a lot of pressure on the ball, trap a lot, make you play on the offensive end. They won’t let you hold the ball very long.”

The Panthers have won three straight in the series after last year’s 64-55 triumph. Owen Dease scored 14 points while Schippert and Higgs added 13 each for Reitz, which converted 26 of 36 free throws while three Stars fouled out. Kooper Staley had 17 points and Ben Cosner totaled 13 for BNL. Reitz’s last visit to BNL ended with a 66-52 win, and those Panthers featured star Khristian Lander, now with Indiana University.

Reitz has lost two straight, suffering a 48-37 setback to Jasper on Tuesday night.

Last meeting: Last year at Reitz, the Panthers converted 26 of 36 free throws en route to a 64-55 victory. Owen Dease had 14 points for Reitz, while Kooper Staley totaled 17 for the Stars.