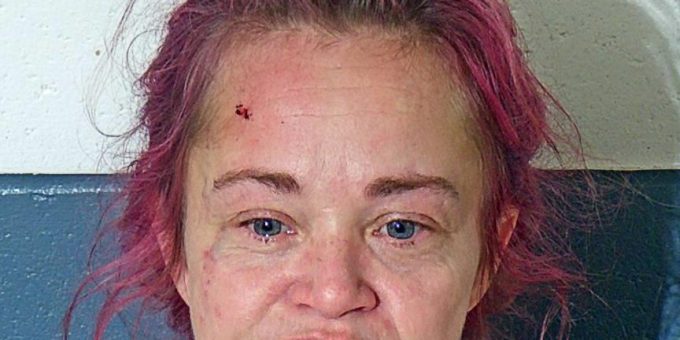 BEDFORD – A Mitchell woman was arrested after Bedford Police were called to a resident on L Street on December 31, 2021.

On December 31st at approximately 4:47 p.m. officers were dispatched to 1623 L Street in reference to a physical altercation in progress.

When police arrived they located a large group of people in the parking lot and began separating everyone on the scene.

Two of the people 39-year-old Lisha Ray, and a male both appeared to be the primary agitators and both were intoxicated on a possible controlled substance.

After speaking with all involved and finding that there were no criminal charges to be filed, the officer was walking back to the parking lot to send the male and Ray on their way.

While walking down a set of stairs, the officers observed Ray exchanging words with a female. The officer saw Ray get in the woman’s face, then stick a finger close to her nose saying  “I’ll go to jail over you”. The officer then observed Ray punch the woman in the head with a closed fist. The woman suffered bruising and redness to the side of her face.

The two then went to the ground and the woman began fighting back in an effort to defend herself. The officer ran over to the two women and forcibly pushed the woman away to separate them.

The officer then attempted to put the woman into handcuffs. She struggled with the officers. She then slumped over in the patrol car as if having a seizure. Officers laid her on the ground for several moments. An officer then administered a sternum rub, which gained her attention almost immediately. Officers again attempted to place Ray in the vehicle but she stood up and refused to get inside. She had to forcibly be put in the vehicle, kicking the officer in the chest repeatedly. She then soiled herself.

She was transported to IU Health Bedford Hospital for medical clearance and then transported to jail on charges of battery against a public safety officer, battery, disorderly conduct, and public intoxication.