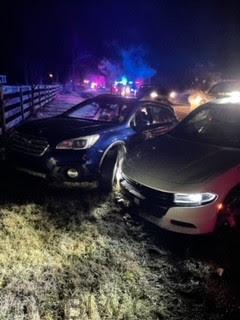 The incident began shortly before 2:30 a.m. Tuesday when officers with the Jeffersonville Police Department and the Indiana State Police spotted a Subaru passenger car recently reported stolen out of Louisville, Kentucky. The Subaru was located using GPS technology and reported to Indiana authorities. When officers attempted to stop the vehicle, the driver fled the scene.

The pursuit began on Loop Road in Jeffersonville and continued past Utica and through the River Ridge Business area before turning east on State Road 62. The pursuit continued on SR62 through Charlestown and New Washington, with speeds reaching 100 mph. After entering Jefferson County, the driver turned south on SR62, and officers successfully deployed tire deflation devices. The vehicle attempted to drive off the road where it then struck a Scott County Deputy’s car and an ISP cruiser before coming to a stop. Officers took custody of the driver without further incident.

The driver has refused to identify himself and was taken to the Clark County Jail after being medically cleared at Clark Memorial Hospital.

The suspect is charged with Resisting Law Enforcement with a Vehicle – Level 6 Felony, Theft – Level 6 Felony, and Reckless Driving – A Misdemeanor. Further charges are likely in both Clark and Jefferson County.