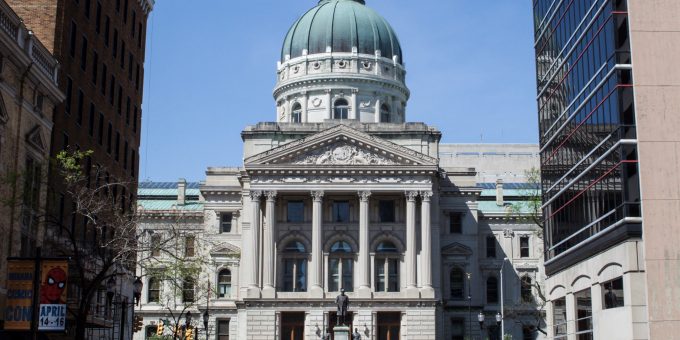 Below is compiled a few that will impact residents the most.

To learn more about these and other new laws click here.

Indiana lawmakers expect to start their new session by quickly diving into a contentious debate over a Republican-backed proposal aimed at limiting workplace COVID-19 vaccination requirements, even as the virus threatens to overwhelm the state’s hospitals.

The Republican-dominated General Assembly is expected to begin the 2022 session Tuesday with action on a bill that supporters maintain would protect individual rights by forcing businesses that require COVID-19 vaccinations to grant exemptions to workers claiming medical or religious objections.

Major business and medical groups oppose the proposal and it hasn’t yet won the backing of Republican Gov. Eric Holcomb.

The legislative session that’s scheduled to last until mid-March will also see some Republicans push for tax cuts because the state expects booming growth in its budget surplus. Conservative complaints about classroom mask mandates and teaching about racial injustice have also led to bills.

A look at some of the top issues:

That request, however, has become entangled with limits on workplace vaccinations, as Republican lawmakers react to conservative grievances over government-ordered virus precautions.

The Indiana Chamber of Commerce and other major business groups object to President Joe Biden’s proposed vaccination mandate for businesses and the state push to prevent employers from making such decisions on their own.

Medical experts argue that Indiana still faces a health emergency with a big spike in COVID-19 infections that pushed the state’s hospitals to their highest-ever overall patient counts during December. State health officials say Indiana averaged more than 40 COVID-19 deaths a day for much of the month.

“The unvaccinated are killing us,” said Dr. Donald Westerhausen of Granger, president of American College of Cardiology’s Indiana chapter. “We’re overwhelmed at the hospitals.”

Indiana’s state government is flush with cash as a December report projected booming growth in the state budget surplus.

That is setting up a push among many Republicans for tax cuts, although top Senate Republicans are taking a cautious stance by saying they are worried about inflation and a possible slowdown in-state sales tax collections when federal COVID-19 relief payments end.

Officials estimate tax collections will grow nearly $1.9 billion, or 10%, more for this budget year than was expected when the current state spending plan was approved in April. That would push Indiana’s budget surplus to a whopping $5.1 billion, or 29% of state spending, by the end of next June.

Holcomb has been noncommittal on whether he believes now is the time for new tax cuts. House Ways and Means Committee Chairman Tim Brown, who is retiring after the 2022 session, is pushing for tax cuts, saying “citizens that worked hard deserve a break.”

Legislative Republicans could make school board elections more political, following protests in some districts over classroom mask mandates to protect against COVID-19 and teaching about racism.

One proposal would give school board candidates the option to add their political party memberships to what are now nonpartisan school board elections. Some Republican lawmakers, however, want to go further and make school board races fully partisan as for most other elected offices, complete with GOP and Democratic primaries.

Indiana legislators don’t seem poised to join other Republican-led states in trying to ban the teaching of “critical race theory,” which has become a catch-all term for the idea that racism is systemic in the nation’s institutions and that they function to maintain the dominance of white people in society.

Republican House Speaker Todd Huston has said he expects a bill “ensuring that parents have more insight and input into the curricular materials and surveys being used in their schools.”

A renewed push for Indiana to join more than two-thirds of states with some form of legalized marijuana use appears to face the same roadblock it has for years from Statehouse Republicans.

Democratic legislators argue that legalization could benefit those wanting to use it for medical purposes, create new jobs and become an additional tax revenue source for the state.

But Holcomb and top Republican lawmakers say they are reluctant to do so while marijuana remains illegal under federal law, despite recreational marijuana use now being allowed in neighboring Michigan and Illinois.

“I’m going to be very, very, very slow to support legalization,” Bray said. “It may be that we find ourselves in a position where we need to decrease significantly the criminal penalties that are out there as a result of it because we need to recognize where we are in this time as a nation.”

The Associated Press contributed to this story.