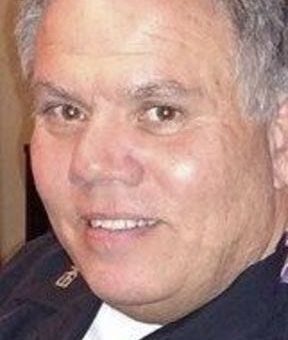 Michael David Johnson a distinguished police officer and a Master Trainer of police dogs completed his earthly journey and was welcomed into the mansions of heaven on Thursday, December 30, 2021.

Johnson dedicated his life to serving and protecting his nation and local communitites. He served as a US Navy sailor, a distinguished police officer, canine officer and a master trainer of police dogs during is career. Johnson and was also the founder and president of the American Police Canine Association where he trained more than 7,000 canines and their handlers.

Mike earned his criminology degree from Arizona State University.  For more than three decades, and prior to his retirement, he served various ranks as an officer within the Bedford Police Department, beginning as a DARE officer.

Former Bedford Police Chief Dennis Parsley had the honor to work along side and lead Johnson. Parsley reflected that during his service with Johnson, he was a “humble man”.

“He was a humble man. He was renown for his abilities as a police dog trainer,” said Parsley. “He was second to none.”

His last duty of service was to serve and protect the City of Mitchell as the Chief of Mitchell Police Department.

Prior to his law enforcement career, he served seven years in the US Navy aboard the USS Norton Sound and the USS Pelalu.

Johnson was fighting asbestos poisoning that stemmed from his military service. According to his daughter, his lungs have been slowly dying, and 3 weeks ago his health began to decline. Blood clots had formed in his lungs, leg, and heart. Medication was able to dissolve some of the clots and surgery was not necessary. However, his oxygen levels continued to fall and he developed pneumonia.

The doctors gave him the option to be intubated, and he refused. He wanted to go home to be with his family, friends, and beloved pets. He also wanted to eat plenty of shrimp and drink wine before his passing.

He was escorted home down State Road 37 by several of his fellow police officers.

Among Michael’s last words were these: “The quality of my life is measured by serving the God that I love, the family I raised, the friendships I made, the officers I developed, and the people I served.”  We are indeed grateful for his life and lasting contributions.

He leaves behind his wife Bonnie of 32 years and four children Michell Miller, Amanda Wilson, Phillip Mills, and Matthew Mills.

The family will receive friends from 4:00 p.m. and 8:00 p.m. Monday and from 10:00 a.m. Tuesday at the Bedford First Baptist Church. The funeral service will begin at 11:00 a.m. Tuesday, January 4, at the Bedford First Baptist Church with a memorial service conducted by Stone City FOP Lodge No. 94.  Burial will take place in Green Hill Cemetery with military honors accorded by American Legion Gillen Post No. 33.

The family respectfully requests that masks be worn. The funeral service will be live-streamed through Chastain Funeral Home’s Facebook page.

Memorial gifts can be made in Mike’s memory to the White River Humane Society.