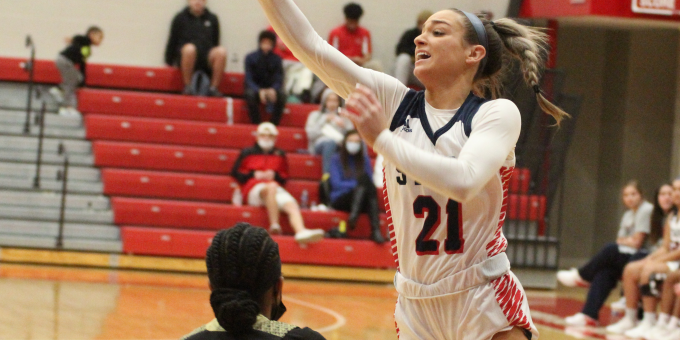 JEFFERSONVILLE – With the upset sirens blaring, like the warnings for an approaching super cell in Tornado Alley, Karsyn Norman shepherded her struggling team to safety. Bedford North Lawrence was in trouble, in the path of danger, and Norman came stormin’ to the rescue.

Fearless but not frenetic, sensing the dire consequences of inaction, Norman whirled into superstar mode, exploding for a career-high 30 points as the No.5 Stars surged late for a 54-43 victory over testy Warren Central in the Body Armor Showcase on Wednesday afternoon.

This showcased Norman’s amazing abilities. She’s usually a daredevil in attacking the rim with her quickness and slickness. That avenue was shut off, so she stepped outside, drilled seven 3-pointers, and shot down Warren Central’s serious threat. BNL (15-1, still undefeated against Indiana competition) played from behind – and the Stars are not accustomed to that position – for the first 20 minutes.

Then, in the space of two electric minutes, about the time it takes for microwave popcorn, Norman exploded. She was already hot, but she torched to another level, hitting three straight bombs to highlight a sensational 16-1 run that powered BNL in front, where it stayed.

She blew away her previous best scoring performance (of 21), and BNL needed every precious point. She had no idea of her total, only that her team was scuffling, gasping a little as Warren Central’s wave of athleticism and shot making caused some angst.

“I guess I was just feeling it. I don’t know why,” Norman said with a shrug and a smile. “My teammates were kind of struggling, and I’m going to have their backs like they have mine. I had to take a little bit of the load.”

Her triple sonic boom reverberated across the basketball landscape. Swish, a bomb from the key for BNL’s first lead at the 3:11 mark of the third quarter. Swish, another deep dagger. Boom, a third for a 43-34 lead as the Warriors (7-7) recoiled from the assault. If there’s a better junior point guard in the state, it needs to be proven. When before, a younger version of herself, she would shy from the pressure of the spotlight, she embraced it.

“It’s a good thing,” BNL coach Jeff Allen said. “Everybody else seemed like they couldn’t find the basket. But she really came through and made some clutch shots. She’s taking great shots and shooting the ball a lot better.”

That second-half eruption was necessary because Warren Central was not impressed by BNL’s resume and pedigree. The Warriors ripped through BNL’s defense for a 10-3 lead, for 17 first-quarter points, for their biggest lead at 28-20 midway through the second quarter. This unscheduled clash, hastily put together when other teams in the event were erased by virus quarantines in a surreal 24-hour period, broke in Warren Central’s favor. BNL had to adjust to the speed and tenacity of the opponent.

“I knew this would be a tough game,” Allen said. “They’re pretty good. Whenever that change happened, I think of the three choices we had (BNL was set to face Louisville Male, then Columbus North before a final adjustment to the event), that was probably the toughest choice. And it was great. That was a great game for us.”

If not for Norman’s late flurry, a fast-break and her fourth trey of the half, the deficit would have been greater. BNL clawed within 28-26 at intermission. Norman had 17 points, the rest of the Stars were a morbid 3 of 17 from the field.

“The first half went well,” WC coach Stacy Mitchell said. “We shot the ball well, played pretty good defense, the girls were tuned in. They were alert. One thing about basketball, there are certain things you cover on a day-to-day basis, you should be ready to play anybody.”

Allen didn’t dwell on the offensive woes, multiple missed layups being an obvious talking point. He pinpointed the defense. BNL allows only 35.9 points per game, and the Warriors were already close to that total.

“They’re very athletic, they were making shots early,” Allen said. “We don’t give up 28 points in a half very often. That’s not us. The kids really dug in and fought. I’m proud of them. What a great test.”

Warren had a 34-29 edge when the BNL whirlwind touched down. Norman started it with a drive through traffic, and Madisyn Bailey dropped a corner bomb. Then Norman went atomic, and Chloe Spreen capped the burst with a post-up basket in the lane for a 45-35 lead.

The Stars maintained control from there, with Spreen popping a 12-footer after a hustling offensive rebound by Mallory Pride, and Bailey found Pride for a layup.

Spreen finished with 8 points and 9 rebounds, Carlee Kern had 9 boards, and Pride grabbed 9 as BNL owned a 39-32 edge in that key category. But that work was overshadowed by Norman, who brought back memories of BNL’s 19-bomb blitz in the same arena last season.

“Everybody was hot then,” Allen said with a laugh. “I wish we had been that way today.”

Norman had five treys that night against Jeffersonville. That was her previous best. That was during an 84-37 blowout, with no pressure. This was done under much more duress.

“It did not feel like that,” she said. “I had no idea. It was fun. It was hard to drive by. I’m glad I was hitting threes.

“I expected a little bit of a slow start, and that’s definitely what we had. We started off rough. Coach Allen called me over, told me to start hitting shots.” If only coaching were that easy.

Sanaa Thomas had 14 points and Denishia Nalls added 10 for WC, which was limited to only 15 points in the second half. They combined for 5 treys and 21 points during WC’s time in front. BNL had not been in that predicament for some time.

“You have to have that sometimes, to understand it,” Allen said. “So when you get in that position, in the postseason, you don’t have kids panicking. Our kids still expect to win, even when they’re behind and haven’t played well. You have to have that.”

BNL will now be idle until Jan. 8, when it visits Castle.