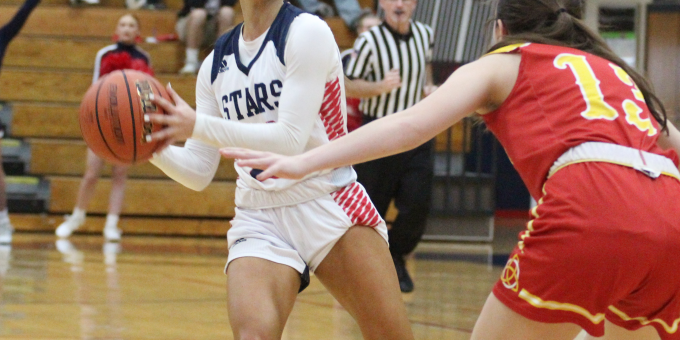 BEDFORD – Forced to scramble and prepare for a new opponent on less than 24 hours notice, Bedford North Lawrence will rely on the basics when the No.5 Stars clash with Warren Central in the Body Armor Showcase at Jeffersonville on Wednesday.

BNL (14-1) was originally set to face Louisville Male in the final game of the 10-team event. Male’s team was placed in virus quarantine on Monday afternoon, forcing that cancellation. Then Columbus North’s clash with Louisville Butler (in the same event) was wiped out on Tuesday by virus protocol. So the shift of BNL into the 3 p.m. slot to face the Bull Dogs was obvious and simple. But that was changed just minutes later when transportation issues dictated another shift. So now the Stars will battle the Warriors at 1:30.

That doesn’t make scouting and planning very easy. BNL will make the trip a little blind, in terms of recent familiarity, and counting on its talent to shed light on any mystery. BNL’s only previous encounter with Warren Central came in the 2018 semistate.

“You have to rely on your teaching, what your philosophies are, defensive fundamentals,” BNL coach Jeff Allen said. “It’s kind of like a college final exam. If you wait until the last day, it probably won’t work out too well if you haven’t done your work during the semester. Hopefully we’ve done enough work we can just be solid. Defense is where it will have to start.”

The Stars are coming off their finest hour, conquering East Central and No.3 Noblesville in the Limestone Classic last week. Chloe Spreen, who earned IBCA Player of the Week honors for her performance that day, scored 28 points against Noblesville while Karsyn Norman added 17 and did fantastic defensive work during both wins. BNL held Noblesville to 40 points, and the Stars are allowing only 35.9 per game.

“Our defense was just outstanding,” Allen said. “And it starts with our defense. Playing that well just gives you confidence on the offensive end. I was proud of what they did. Hopefully we can keep that going. It’s hard to keep that edge. Practice gets a little old this time of year.“

Spreen leads the offense at 16.6 (plus 5.8 rebounds) while Norman is contributing 13.9 points and 3.5 steals. Mallory Pride, Madisyn Bailey and Carlee Kern have been solid in their roles, each adding 6 points per game.

“The kids are inspired by what they did, and they’ll continue to try and get better,” Allen said. “In some ways I’m happy we have this game, because otherwise we wouldn’t play until Jan. 8, which is a big layover. The inspiration will be how we performed in that tournament last week.”

When: Wednesday, 1:30 p.m. at Jeffersonville

Last meeting: Warren Central prevailed 66-55 in the 2018 semistate at Jasper.