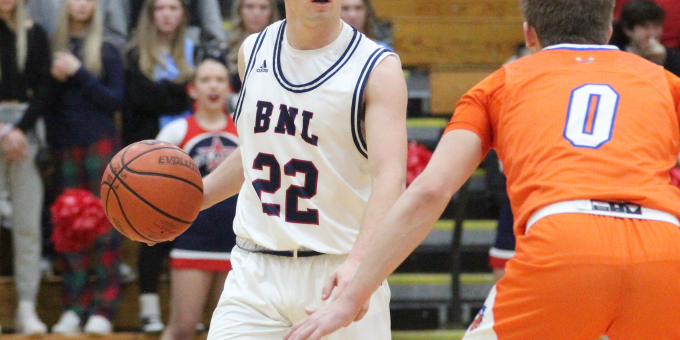 BEDFORD – The tournament is named for a Hall of Famer, a coach with a state championship ring, three trips to the FInal Four, and the most wins in program history. That’s quite a legacy, a mark of excellence for the four teams set to vie for the championship on Tuesday.

Bedford North Lawrence, coming off its most impressive win and performance, will attempt to impress the event’s namesake when the Stars host the third annual Danny Bush Classic. BNL (2-4) will face Owen Valley (3-2) in the opening game at 10 a.m., followed by the clash between No.15 Bloomington North (6-2) and Whiteland (5-3) in the second semifinal.

The first-round losers will return to collide in the consolation at 6 p.m., with the winners set to battle for the title at 7:30.

The Stars have the least sparkling record of the foursome, but they’re back to full strength. Junior guard Colten Leach, in the final stages of knee surgery recovery, played without restricted minutes last week against 3A defending state champion Silver Creek, and it’s no coincidence BNL recorded its best win, conquering the Dragons 64-51.

“It was huge for us,” BNL coach Jeff Hein said. “The kids came out with a chip on their shoulders, and it was great to get a quality win. Good win against a good team. We’re obviously a lot better. Having Leach takes so much pressure off kids that weren’t comfortable doing more.”

Now that Leach’s off-season injury can’t be used as a crutch, this tournament will be a measuring stick to calculate BNL’s true growth. Right now, Colton Staggs leads the way in scoring (13.3), along with contributions from Kaedyn Bennett (10.3) and Leach (11.3). Staggs added career highs of 11 rebounds and 11 assists during the victory over Silver Creek.

In addition to Leach’s return, BNL has also layered in some depth. Kole Bailey scored 18 points off the bench (almost all that work coming in the second halves during two games) last weekend. So after playing his starting lineup all but the final two minutes of the opener, Hein now has seven he can count on. And that number could go up, depending on the opponent and team needs.

“Kole has been huge,” Hein said. “Every game we’ve put him in there, he’s made the most of it. He plays hard, gives us something, whether it’s rebounding, jumping in a passing lane, or points. He’s just happy with his role, coming off the bench to give us a lift. He’s versatile and we can play him anywhere.”

“Size is definitely an issue,” Hein said. “It won’t be the last time. We’ve gone a good job for the most post, with Bennett and (Jett) Jones, some kids that can defend inside. It’s positioning, intelligence, and getting help from other positions. They can’t defend those guys one-on-one, so how we decide to double the post is important. We’re not big enough to defend 6-8 kids by themselves, so we have to play team defense.”

“Our team is still learning, as everyone is in a different role than they have been in the past,” said first-year coach Jon Neill. “With graduating our school’s all-time leading scorer (Stephen Atkinson), guys are having to figure out how to play without him around. We have been a very balanced team, and hopefully that makes us challenging to prepare for as we could have a number of different guys lead us on any given night.

“BNL defends really well. The aggressive style they play as a 4A team is something that we may not see as much, and will help prepare us as we move through the second half of the season. Every team in the state sets out to win a sectional each year, and playing in a tourney with this format gives players an opportunity to see what things will be like on that regional Saturday.”

Bloomington North vs. Whiteland: The Cougars will feature senior guard Nick Klaiber (18.0 points), 6-8 forward and Div. I recruit J.Q. Roberts (13.5 points, 9.5 rebounds) and senior guard Marco Fitch. North started the season with a win over BNL (66-47). They’re coming off a 73-64 loss to undefeated 2A foe Monroe Central in the final of the Connersville tournament last week.

“We have struggled with some consistency over the past few weeks, but we know what we’re capable of,” Whiteland coach Nate Cangany said. “In our losses, we haven’t shot a great percentage, so we need to make sure that we knock down the open looks that we get. If we can play more consistent at Bedford, I think we can definitely compete.

“North has some really good players with Klaiber and J.Q., and we have to make sure we are really solid defensively about taking away what they do well and not letting their supporting cast get comfortable and change the game. We have to handle their length and pressure and get good possessions on offense each time down.”

“Win or lose, we’ll have a challenge that night,” Hein said.

Game notes: North is playing its second straight holiday tournament. The Cougars lost to 2A No.18 Monroe Central in the final at Connersville last week.