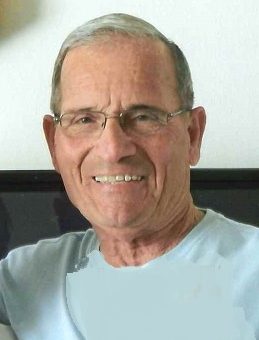 Born in Avoca, Indiana, on June 19, 1935, he was the son of Vada and Dorothy (Marsh) Conner.  He married Fran Wright (Phelps) on September 22, 2004, and she survives. Darrell graduated from Bedford High School in 1954.  In his early working career, he worked in the stone mills.  He loved to tell the story of when he was a very young man he carved some stone that was placed around the windows of one of the big cathedrals in Washington, D.C., and that he and another fellow worker were sent there, by train, to watch the stones being placed on the cathedral.

He worked for the last nearly 30 years in the Pistons Department at General Motors where he eventually retired in 2004.  After meeting his new wife-to-be, Fran, in 2004, she insisted that it was time for him to retire and to start enjoying their new lives together as husband and wife. He had told Fran that when he retired, he would love to spend the winters in Florida and asked her if she would like to do the same. Of course, she knew that he had worked so hard all his life and deserved to get away from the cold, snowy weather here. So, right after they were married, they found a house in Sebring, Florida, and were snowbirds for seventeen years. He truly loved being down there with his bride, and Darrell was always so grateful that he and Fran were able to spend the winters down there.

Darrell took so much pride in everything he did.  Fishing and gardening were his passions.  He had several vegetable gardens he planted every summer.  He worked tirelessly in them.  He loved to show pictures of his big, beautiful goatbag tomatoes which he had grown.

Darrell also enjoyed singing karaoke, and he had recorded over 20 CDs for his family and friends.  He was a good Christian man who believed in God and never took life for granted.  Darrell was also a very kind, generous, gentle, and loving man, and he had a great sense of humor.  He always tried to make his family and friends feel comfortable anytime they were around him and to always say something kind to everyone he knew.  His beautiful smile will always be remembered.  He loved his wife, Fran, with all his heart more than anything else in his life, and he tried to show her every day how much he loved her and appreciated her for always being there for him and for supporting him in everything he did.

Funeral services will be held on Wednesday, December 29, 2021, at 1:00 p.m., at Day & Carter Mortuary located at 1133
Lincoln Avenue, Bedford Indiana. Visitation will be from 10:00 a.m. until the time of the services on Wednesday, December 29, 2021, at the Day & Carter Mortuary. Burial will follow at the Rest Haven Cemetery located at 650 S. Eisenhower Drive, in Edinburgh, Indiana.

For the safety of everyone attending the funeral service, the family is requesting that masks be worn at all times at the funeral home and at the graveside.