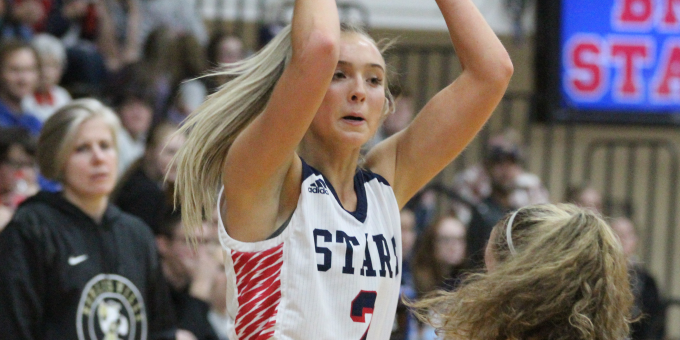 BEDFORD – With the spotlight shining like the high-noon sun, facing its most intense challenge, Bedford North Lawrence cast a dark shadow of dominance. Who’s the best team in the state now? The voters decide that opinion and popularity contest. The Stars made a statement that’s hard to ignore.

No.5 BNL pulled down a defensive shade on No.3 Noblesville, winning the championship game of the Limestone Classic, named in honor of former BNL coaching legend Pete Pritchett, with a performance worthy of that Hall of Fame name and his approval. The Millers got ground up.

With sophomore sensation Chloe Spreen in unstoppable mode, with a phenomenal defensive effort that threw shade on a high-level offense and mashed it into grain dust, the Stars cracked down on Noblesville for a convincing 59-40 triumph on Wednesday night. Spreen scored 28 points and Karsyn Norman added 17 as BNL (14-1) won its eighth straight game and remained unbeaten against Hoosier competition.

BNL finally clicked on all cylinders, and the horsepower was incredible. Spreen, after a slow start, hit her final 11 shots. The Millers, ranked among the state leaders in scoring at 68 points per game, were overshadowed by a swarm of locust, a plague that held junior star Ashlynn Shade to 9 points (and her last three baskets came in the final four minutes, with the blowout long decided).

In the state’s toughest regular-season tournament, the Stars reduced the field to a whiter shade of pale. Perhaps their future is so bright, they need to wear shades.

“Oh my gosh, we were so on,” Norman said. “Everybody was on. I don’t think it could have gone any better.”

If BNL can play better, nobody could stand the glare. Spreen was other-world hot, hitting her final 11 shots. Norman was the Deion Sanders (one of the great cover cornerbacks in the history of the NFL) of the court, taking one side of Noblesville’s offense and eliminating it. That was Prime Time stuff.

“That’s the best performance we’ve had this year, and I’d say in several years,” BNL coach Jeff Allen said, and the complete devastation brought back memories of BNL’s regional victory over No.1 Columbus North en route to the 2013 state title. “The kids were dialed in. It all started with the defense, that’s what we talked about. We felt we could compete with them if we stopped them on the offensive end.

“The kids bought into that, and it fed over into the offensive side. Confidence grew and we just continued to push the pace. The kids became more and more confident, and it was ’Hey, we’re going to win’.”

Baby, there was no doubt about that, not after a 10-0 run in the first half created separation, not after Spreen exploded in a starburst of brilliance, dropping shots from every angle and distance, not after BNL opened the second half with a 12-3 blast to a 41-19 lead. Simply sensational. The Millers, with the highest Sagarin computer rating in the state, were crumbled and cracked.

Noblesville tried everything: box-and-one on Norman, zone, man-to-man. Nothing matttered, and what if it did? BNL was not allowing anything. Shade, one of the leading candidates for Miss Basketball in 2023 and a recruiting target of major programs across the nation, had three points until the last four minutes. And when Spreen went nuclear, the fallout was fatal.

Spreen from 12 feet, swish. Spreen from the right wing, 3-pointer, boom. Spreen from the top of the key, bang. That flurry created the 21-10 gap, then Norman got loose on back-to-back bombs, plus a Spreen drive, and it was suddenly 29-13. Then the second-half burst, highlighted by Spreen’s two 12-footers and a fast-break basket, by Carlee Kern’s transition bucket off a Norman rebound and dish, and a final Spreen 8-footer. Madisyn Bailey capped the runaway with a bomb at the third-quarter buzzer for 48-25 command.

BNL at its absolute best? “That was pretty close,” Allen said with a sly smile. “To beat what I consider the most talented team in the state, to have that performance, that was us firing on all cylinders.”

Spreen has scored more (her career high was 30 earlier this season against Mitchell), but not against this caliber opponent. She showed why she’s the most coveted recruiting target in the 2024 class. That was the breakout performance many have wanted to see. Well, maybe not Noblesville.

“She’s really good at driving the basketball, but she was kind of being one-dimensional that way,” Allen said. “We’ve encouraged her to shoot the basketball, and she’s expanded her game where she’s hard to guard now, She’s hitting the perimeter shot, the pull-up, she’s getting to the rim. She had the hot hand and we kept going back to her. It’s a great thing to see.”

Norman, in addition to the shade work on Shade, was equally brilliant, hitting three treys.

“Anything we did defensively, didn’t matter,” Buckley said. ”They were really good. Those two kids were phenomenal. Whether it was man, zone, whatever we did. They just answered. What are you going to do? You’ve got two superstars out there, and they played like superstars.”

Meredith Tippner and Kaitlyn Shoemaker paced the Millers with 11 points each. Noblesville had only 4 turnovers but hit only 14 of 48 shots, and BNL rebounded like demons for a 34-25 edge in that stat category. Mallory Pride grabbed 11 and Bailey added 9. Shade missed seven straight shots until the late surge. She will have a few nightmares about the No.21 in front of her.

“If she got it, I was up in her,” Norman explained. “She can do everything, I just tried to do the best I could. She’s really good.”

BNL is really good. Many were worried after watching Noblesville dismantle No.1 Crown Point in the afternoon semifinal. That got the attention of the Stars, who responded with greatness.

That ranking will be irrelevant once the postseason starts and the best is decided on the floor, where it should be determined. But this one will reverberate across the state.

“Best Christmas present I could have, that’s for sure,” Allen said. Then he went out to hug a few players, who deserved it.

BNL will return to action on Dec. 29, facing Louisville Male at Jeffersonville.

Crown Point 60, East Central 50: Jessica Carrothers scored 29 points while leading the Bulldogs (13-2) to a victory in the consolation game. Josie Trabel paced the Trojans with 27 points.