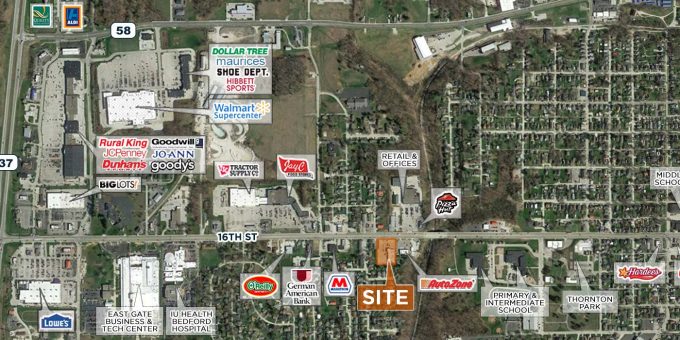 “This is a great day for the City of Bedford,” said Bedford Police Chief Terry Moore. “This needed to be done years ago. The city, mayor, and elected officials are willing to invest in our citizens and the safety of those who live and may live here. This (new building) will help with retraining and recruiting new officers.”

The Redevelopment Commission voted to approve the purchase agreement Wednesday afternoon during a special meeting at the Milwaukee Depot.

The Commission will purchase the building for $825,000. The agreement requests that $20,000 earnest money be paid upfront. The Commission also authorized the appointment of two appraisers to appraise the building and real estate and will have the property surveyed and inspected within the 60-day due diligence time frame.

If the Commission finds a problem, according to City Attorney Gregg Pittman, the commission can back out of the agreement and their earnest money will be returned.

Mayor Sam Craig says the 13,000 square foot building that was built in 1991 sits on more than 2 acres and will be a prime location for a new police department.

“We have been working on this for some time and have inspected the building,” said Mayor Craig. “This is a big step to have the police department in a central location.”

The current police department has 7,000 square feet, and the detective’s offices which are upstairs are not handicapped accessible. The building also had some structural issues that need to be addressed.

The new building will allow for growth, expansion and will address safety concerns.

“They will also be able to have a secure area to transport inmates in and out of the building,” said Mayor Craig. “They don’t currently have that. We are very very excited. This will be a huge asset for our community and the police department.”

Mayor Craig did state there are no plans to move City Hall, which is located in a separate building then the police department.