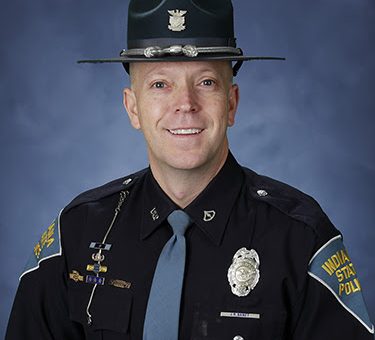 SELLERSBURG – Indiana State Police Detective/Master Trooper Joshua Banet retired Tuesday after 25 years of service to the department and serving the citizens of Indiana.

Josh Banet is a 1990 graduate of Floyd Central High School.  After high school, Banet attended Vincennes University, where he received his Associates in Science in 1992.

In 1996 Banet was assigned to the Sellersburg post after graduating from the 54th Indiana State Police Recruit Academy.  During his time with ISP, Master Trooper Banet has served on the Tactical Intervention Team, the Explosive Ordnance Disposal Squad, the Meth Suppression Unit, and the Criminal Interdiction Unit.  He has also served as a Control Tactics Instructor and Taser Instructor during his ISP career.

In 2013, Trooper Banet began serving as a district detective and served in this position until his retirement on Tuesday.

Recently, Josh Banet accepted a position as a detective with the Clark County Sheriff’s Department.

The ISP would like to congratulate Master Trooper Banet on his 25 years of dedicated service to the department and State of Indiana and wish him well in his future endeavors.