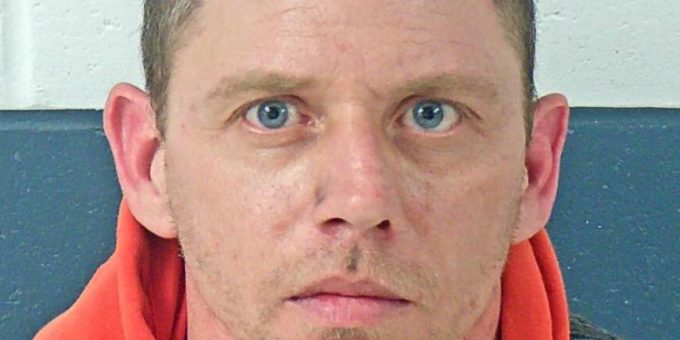 BEDFORD – A Bedford man was arrested Tuesday when Bedford Police officers were called to the 810 block of O Street after a report of two males in a blue Chevrolet Cavalier taking a UPS package off of a porch.

When officers arrived they spoke to the caller who said he was dropping his mother off at her house when he noticed the vehicle parked at the end of the alley. He then witnessed a male in an orange hooded sweatshirt on the porch of the home take the USP package and get back into a vehicle. The witness recorded the incident.

While patrolling the area the officers spotted the vehicle in the 1510 block of 9th Street in the alley and a man in an orange sweatshirt next to the vehicle. The man then walked into a garage. The officer knocked on the garage door and 42-year-old Joe Speer answered.

Speer told the officers the vehicle belonged to 43-year-old Jeremy Gulley, of Heltonville. Officers found Gulley inside the home.

Gulley told police the package was in his vehicle and that Speer had taken it off the porch and opened it. Officers located the opened package inside Gulley’s vehicle.

Officers contacted the owner of the package who told police she had given no one permission to take it off her porch. The package contained bedding for a child’s bed.

Police arrested Speer and on a charge of theft. Gulley was arrested because he was wanted on two warrants for failure to appear in Lawrence County.