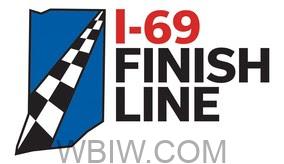 MARTINSVILLE — Governor Eric J. Holcomb officially opened a new section of Interstate 69 today following a ribbon-cutting ceremony in Martinsville. The northbound lanes of the new portion of I-69 opened this afternoon. The five-mile section between State Road 39 and Morgan Street closed for construction in January, allowing crews to work faster and safer, eliminating an entire year of work on the project.

“I am excited to celebrate this historic milestone in the life of I-69,” Governor Holcomb said. “This new section of interstate better connects Martinsville, Morgan County and communities to the southwest with the rest of the state, the region, and the country makes travel safer and more efficient, and will catalyze economic growth and job creation across the Hoosier state.”

The sixth and final section of I-69 between Evansville and Indianapolis, known as I-69 Finish Line, is on track to open by the end of 2024, extending the interstate to I-465. Construction began in Martinsville in 2019 and included local access roads, as well as Finish Line’s first overpass at Grand Valley Boulevard that opened in June 2020. Efforts turned to the I-69 mainline in early 2021, adding new pavement and bridges, as well as interchanges at State Road 39, Ohio Street, and a combined interchange at State Roads 252 and 44.

“INDOT is proud to open this newest section of I-69 on time and on budget,” INDOT Commissioner Joe McGuinness said. “I want to thank our engineering and construction partners who joined with us to deliver this work on an accelerated schedule while doing it safely and keeping traffic and commerce flowing. I also want to thank the community of Martinsville for their patience as we delivered this transformational project over the course of the last year.”

Southbound lanes are expected to open in Martinsville later this week. Also opening to free-flow traffic are new lanes up to Banta Road, just south of State Road 144 near the Johnson County line, marking the completion of 17 miles of new highway in 2021.

Construction activities will continue in the Martinsville area through mid-2022. Mainline work will pick up in Johnson and Marion Counties next spring.