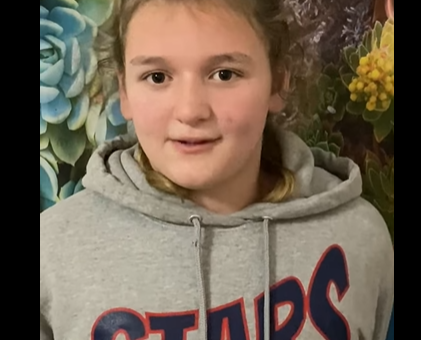 One day, Mya came home from school with a huge hand made envelope full of change she had collected at school from her friends nearing $10 in pennies, dimes, nickels and quarters. She had started collecting money to purchase lights for the fifth grade students at her school, in honor of her friend Camden who sadly passed away on December 23, 2020.

The lights are a set of head and tail lights that can fasten over bicycle handle bars and under the seat of the bike, but can also be used on scooters, hats, backpacks, allowing anyone to use them while out and about. Mya’s desire is to provide something that will help keep people safe, to help prevent more unfortunate accidents like Camden’s.

After talking over her ideas, she became fully invested on the idea of raising the money to buy safety lights for students’ bikes. Mya set her first goal of $150 to raise enough for the estimated 40 fifth graders at Oolitic.

There are a total of 482 students at the Oolitic Campus, and to supply each of them with light sets, it will require approximately $1775. At the current time, her donations total $1545 with 49 people having donated thus far.

“She made a video Sunday evening and asked me to post it on Facebook, and in less than 2 hours of posting, she had surpassed her first goal and began raising more to purchase light sets for the rest of the Elementary school,” said Amanda, Mya’s mother.

The first two boxes of lights arrived on Friday and Mya hopes to make arrangements with Camden’s dad when the students return to school after break to distribute the lights to students.

Going forward, Mya plans to expand this effort to the other schools in her school district as well as provide some for the Oolitic Town Marshall to provide to any child they may see out and about who could use one.