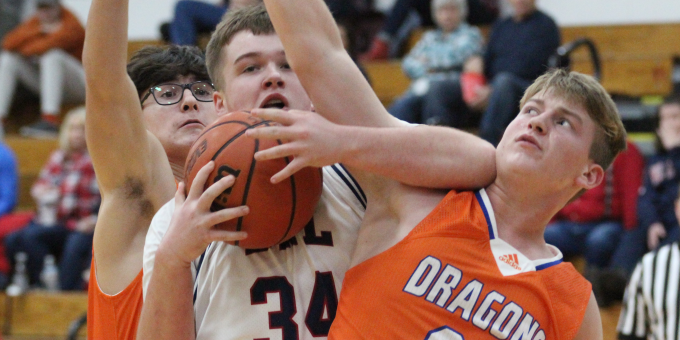 BEDFORD – Standing at the crossroads, given the choice of the path of self-pity and least resistance, or the rougher road of grit and character, Bedford North Lawrence made the right turn to success. From this point, no one can question the resolve, the fierce fight, the gravel in the guts and spit in the eyes.

Rather than pout and point to the bitter disappointment of the controversial ending and potentially devastating loss just 24 hours earlier as a justified reason for a performance hangover, the Stars showed their steel side, bouncing off the floor to deck a nemesis. If there’s a turning point to be identified later this season, this victory could be it.

BNL, with amazing scoring balance and stone-cold tenacity, roared instead of sulking, stunning Silver Creek 64-51 on Saturday night at BNL Fieldhouse. Kaedyn Bennett totaled a career-high 17 points, leading a pack of double-digit contributors, as the Stars (2-4) conquered the defending Class 3A state champion and slew the Dragons for only the second time in the intense series.

After a ferocious start, blasting to a surprising 26-11 edge midway through the second quarter, after Silver Creek stormed back to take the lead in the early stages of the fourth, BNL finally found a way to finish a battle against quality competition. That required some introspection, some clutch shots from Bennett and Trace Rynders, some ice-water free throws in the final two minutes. That’s what winners do.

No gloom, no doom this time. The value of the win cannot be overstated.

“We were at a crossroads,” BNL coach Jeff Hein said, with the echoes of the heartbreaking loss at Madison still ringing, with so many conversations still revolving around that ending. “How would we handle it? I think they handled it the right way. The fork in the road, which way will they go? These kids just gave a great effort, were so determined to get something in the win column.”

The Dragons (3-3) were the owners of momentum, coming off a super-charged victory at Jeffersonville on Friday night. They deflected BNL’s terrific start with a 12-1 close to the first half, they charged in front on the sheer will of senior point guard Branden Northern, who poured in 27 points. BNL had been down this road before: close, but somehow falling short.

Bennett and Rynders buried huge 3-pointers midway through the fourth quarter, Kole Bailey had sparkplug points, and the Stars made 11 free throws in the final 2:05 as the Dragons went to chase mode. There was no expected hangover, just some unexpected toughness in the moments that demanded it.

“It was the complete opposite,” Hein said. “You could tell they were upset, the way things went down last night, but I had a feeling they would bounce back. We gave great effort, we were the team that deserved to win.”

The start was spectacular: 8-0 right away, followed by a 14-2 burst to the 15-point advantage. Jett Jones, totally silent the previous night, was loud during that run, with four baskets. Bennett was huge, with two treys. Silver Creek got knocked backward, absorbing a gut punch.

“They were ready to play,” Silver Creek coach Brandon Hoffman said. “I knew they would be ready. I didn’t expect a hangover at all. They were hungry, that’s the way they played, and we were not. They played with a little sting.”

The Dragons still had fire. Hayden Garten swished back-to-back corner bombs, Northern converted two free throws following a Hein technical foul (his first during his three seasons with the Stars). Garten ripped a third trey, and Northern ended the half with a deep buzzer beater. BNL’s lead had vanished, down to 30-29.

Zac Stricker started the second half with a breakout layup and a 3-pointer from the key as Silver Creek took a 36-33 lead, but BNL answered that with energy points from Bailey (two free throws off an offensive rebound and a layup) and two Colten Leach jumpers in the lane. The Dragons made a second move in front with Northern’s transition trey.

Then came the defining moments. Bennett from the top of the key. Bang. Rynders from long range on the wing. Boom. The Stars had a 51-46 edge. Northern came back with a 3-pointer from the key. Then the Stars went to their two-minute offense, which meant patience and ball movement against a halfcourt trap that Silver Creek calls its “zipper” defense. Except BNL zipped up victory with free throws from Leach, Bailey and Rynders.

“All the way through, they did what they needed to do,” Hein said.

Bennett was a big shot with the big shots. Lacking confidence? “Never,” he said with a smile. He hit four treys, the biggest for the 48-44 lead in the fourth. “I was putting it up regardless,” he said. The other heroes were Leach (13 points and 8 rebounds), Rynders (10 points), Bailey (10 points, all in the second half) and Jones (9 points). Staggs didn’t have a field goal but collected 11 rebounds.

Northern was tremendous, adding 9 boards to his point total. Garten and Stricker added 9 points each. Silver Creek had to expend a lot of energy during the comeback and sputtered late.

“Branden was everywhere,” Hoffman said. ‘He’s a warrior, he’s going to battle. He definitely gave it all out there. I’ll never take his effort, his competitiveness, his talent for granted.

“We couldn’t guard them man-to-man, so we had to switch to something else to speed them up. Our trap was able to bring us back in it. Unfortunately that expends a lot of energy, gets us out of rebounding position.”

BN, for only the second time all season, won the rebounding battle. That’s no coincidence. The Stars also converted 22 of 28 at the line, after missing key ones at Madison. Both stats were points of emphasis during the afternoon shoot-around that was lacking noise and enthusiasm. BNL turned on that switch later.

“We learned a couple of things,” Hein said. “We can rebound. And our free-throw shooting was a lot better. Kole Bailey, what a great effort off the bench. He gave us a huge lift. And we’re feeding off those two guards. Leach and Staggs are making good decisions. Our other guys fed off that.”