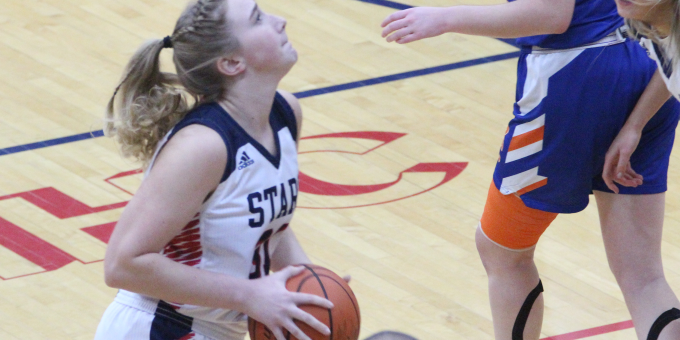 BEDFORD – Evansville Mater Dei coach Chad Breeden has watched the film, a basketball horror flick as Bedford North Lawrence stalks and destroys. It’s a court version of A Quiet Place: make a noise with the ball, and the Stars will strike.

Defense that causes screams. Defense that is deadly. The Stars have been sensational, forcing 19 turnovers while allowing opponents to shoot only 33 percent and score a miserable 35.3 points per game. That’ll cause a few nightmares.

No.5 BNL will unleash its dreaded assault on the Wildcats (6-4) during a Saturday matinee. Mater Dei has lost back-to-back games, including a 51-23 loss at Henderson County (Ky.) while failing to score a field goal in the second half. BNL Fieldhouse, a big house of horrors, isn’t exactly the place to find a cure for offensive ills or tentative bounces.

Breeden’s critique and review focused on the backcourt. His Wildcats have frontcourt power with 6-0 senior Kennedy Wenger (15.2 points, 7.0 rebounds) and 5-11 senior Kate Breeden (the coach’s daughter, who totals 7.8 points and 5.0 rebounds). But in order to do any damage, they have to touch the ball.

”They have the ability to get after your guards,” Breeden said. “When you play up-tempo with that much ball pressure, we’ll be prone to more turnovers than normal. We have to handle that.

“Hopefully we can get the ball to the other end and show off our size. That can be neutralized if you can’t get it down there. We have to play smart and use our heads. They speed you up and get you in a hurry, and it’s easy to lose sight of what you’re doing because you’re always pressured.”

BNL has held four opponents under 30, the result of maximum effort and intensity devoted to that end of the floor. The Stars have been erratic at times on the offensive end, but the defensive tenacity has never wavered.

“We’re making it really difficult for people to score right now,” BNL coach Jeff Allen said. “And we have confidence our shooting will continue to get better. We want to play well, and it will all revolve around effort for us, how hard we’re playing.

“It’s another team we have at home, but we understand, when people come in here, they expect to give us their best shot. We’ll expect that and hopefully be prepared for what they throw at us.”

“The thing about those kids, everybody talks about their offense,” Breeden said. “But they really hawk the ball on defense. They will be a challenge for us.”

BNL and Mater Dei last clashed three years ago, with the Stars winning 51-29 in Evansville. Chloe McKnight had 17 points and Madison Webb had 12, and BNL surrendered only two points in the second quarter that day. The Stars also posted a 61-33 victory the previous year when Mater Dei made its first appearance on Damon Bailey Court.

Last meeting: BNL prevailed 51-29 at Mater Dei during the 2018-19 season. Chloe McKnight hit five treys and scored 17 points while Madison Webb added 12 points for the Stars. Hannah Winiger had 15 points for the Wildcats.