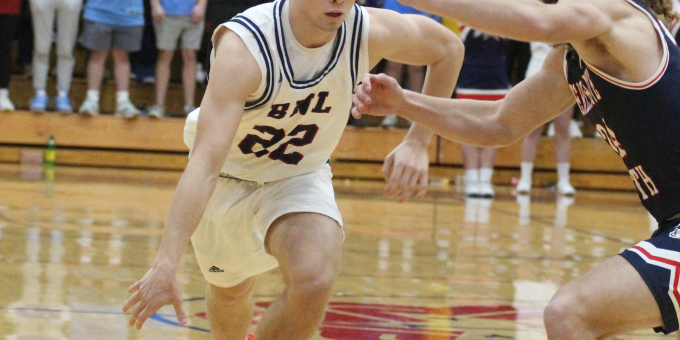 BEDFORD – Uneasy lies the head that wears the crown. That classic Shakespeare line, from King Henry the IV, rings true throughout the centuries since its 1597 origin. Doubtful the famous bard realized how accurate it would be today. Silver Creek coach Brandon Hoffman knows the weight and consequence of the prize, the burden of the throne.

The Dragons were a beast, winning Class 3A state championships in 2019 and 2021. Probably would have finished a dynasty sweep in 2020 had the blooming virus epidemic not forced the cancellation of that state tournament. But like all good things, especially when graduation takes its inevitable toll, the reign eventually ends.

Two superstars and Indiana All-Stars have departed. Trey Kaufman (reshirted at Purdue) and Kooper Jacobi (a freshman reserve at Toledo) were the centerpieces of Silver Creek’s success. Their legacy will last as long as a Shakespeare play. Life has gone on, and the Dragons (2-2 heading into Friday’s road trip to Jeffersonville) have lost some of their fire.

Sympathy? None exists, nor is it expected.

“Nobody in the state will feel sorry for us,” Hoffman said with a laugh. “So we have to get the daggone job done.

“I can’t say life is not good after the success we’ve had. We knew this would come. You can’t hang on to great players forever, they’re off to bigger and better things. But it hasn’t been easy replacing them, and that was expected. You just can’t take two players and replace those two. We really miss those guys, but the beat goes on.”

Silver Creek has not rebuilt from rubble. Senior point guard Branden Northern, another Div. I recruit, returns to lead the title defense. He’s averaging 25 points and 3.8 assists, getting contributions from senior guard Trey Schoen (6.0) and a young cast of role players, especially vital following the ACL knee injury of sophomore guard Kyle Roberts (who was the second-leading scorer at 7.0).

“We’re playing five sophomores and a freshman, along with the big pieces we have back,” Hoffman said. “So we’re a team that will keep getting better every month. Our guys are being thrown to the wolves right now. Branden is really good but he’s having to do a lot for our team.”

Northern is a great lead wolf for the pack. He started the season with 31 points against Columbus East and 30 against Charlestown, both Silver Creek wins.

“He can score three ways,” BNL coach Jeff Hein said. “He can score off the dribble, shoot the three, and get to the basket. Any time you have a high school kid that can do those things, it makes it difficult.

“Northern is really good, and he’ll take a lot of shots. It’s a matter of getting Northern to take the shots you want him to take against him getting the shots he wants. They’ll play fast, get up and and down the floor, try to get the game to a higher number.”

BNL will look to throttle down that tempo, with junior guards Colton Staggs and Colten Leach at the controls. The difference is the Dragons no longer have 6-9 stoppers waiting at the rim.

“Those pose a problem for a lot of people with how they attack the basket,” Hoffman said. “Leach and Staggs are really good ballhandlers and penetrators. It will be a big emphasis on containing them and staying in front of the ball. If you don’t do that, it leads to kick-outs and open threes. And they control tempo, being really good defensively and getting a good shot on offense, no matter how long it takes. The guard play is a major concern.”

Silver Creek has won 6 of the 7 meetings, including the last three. Last year, Kaufman was unstoppable with 26 points and 18 rebounds during a 74-51 triumph. Jacobi added 15 points. Aden Pemberton totaled 17 points and Leach had 12 rebounds for the Stars.

Records: Silver Creek 2-2 (at Jeffersonville on Friday); BNL 1-3 (at Madison on Friday)

Last meeting: Last year at Silver Creek, Purdue recruit Trey Kaufman had 26 points and 18 rebounds while powering the Dragons to a 74-51 win. Kooper Jacobi added 15 points for Silver Creek, while Aden Pemberton totaled 17 for the Stars.

Game notes: Silver Creek is the two-time defending Class 3A state champion (2021 and 2019, with no tournament conducted in 2020). The Dragons lead the series with BNL 6-1 with three straight wins.