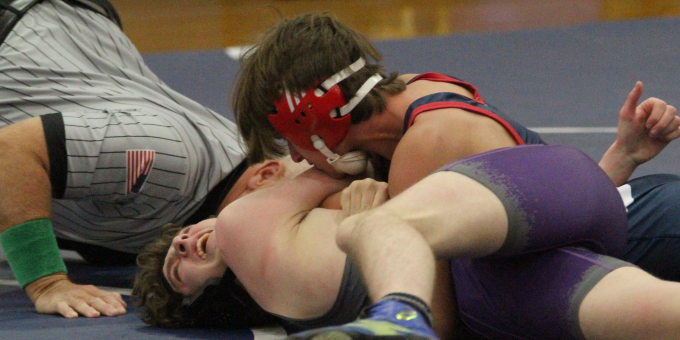 BEDFORD – Need to lose a few pounds over the holidays? Bedford North Lawrence sophomore Gabe Nelson has the perfect program: cut out snacks, soda and sweat for a few minutes on the wrestling mat.

Nelson, who dropped six pounds to compete in a lower weight class, was lean, mean and efficient while winning his match at 132 pounds on Thursday night. But he was the lone BNL winner to take a bite out of his opponent as Seymour slammed the Stars 66-12.

The Owls dominated the action with seven pins and a major decision. Nelson kept the Stars from getting shut out as he trapped Chase Rogers in only 70 seconds while improving to 9-4 this season. After missing the bulk of last season with a shoulder injury, he’s been hungry for success.

“Last year was hard,” Nelson said. “It felt brand new because I had not wrestled in a while. But now I’m back in it, I need to step up my game, get going again.”

Nelson started the year at 138 but decided shifting to a lower class would be beneficial. So he trimmed up over the course of two weeks, scaling back on junk food to scale down. “I just started eating healthy. All that junk food is not good for the body,” he said.

The Stars got chewed up in the other weight classes. Only two went the distance, only three others lasted past the first period.

“They’re a young group, got to keep that in mind,” Branam said. “Even our upperclassmen are not seasoned veterans. As a coach, I hate it for them because I want what’s best for them. I don’t care that much about winning duals, but I want to see us excel and keep growing. Tonight did feel like a step back. That can happen sometimes.

“With some kids, it was a matter of being outclassed. There’s no shame in getting beat by a better wrestler. But there were some preventable losses. We have to have the attitude of not wanting that to happen again.”

BNL’s other points, besides the six for Nelson’s pin, came courtesy of a forfeit win by Jorj Filler at 120.

The Stars will compete in the Bo Henry Classic at Bloomington North on Saturday.