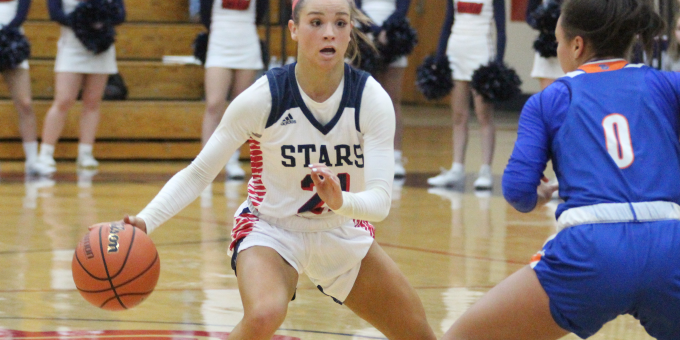 BEDFORD – Star power, the preoccupation with the famous and celebrated, can be dazzling. Bedford North Lawrence, blinded by the light of an intense challenge, proved Star power is greater. With their Deuce wrapped up, the Stars needed another runner in the night. They got down, never got tight, made it through the night.

With Silver Creek smothering superstar sophomore Chloe Spreen with the blanket of attention, with an unrecognizable start causing extreme angst, No.5 BNL answered with balance and brilliance, rallying to answer a double-dare with a gutsy victory over the defending Class 3A state champion.

After a frightening beginning, the Stars fought back for a 49-42 victory over 3A No.2 Silver Creek on Thursday night. Karsyn Norman had 13 points and Carlee Kern added 11 as BNL (11-1) remained unbeaten against Hoosier competition and ended Silver Creek’s 22-game winning streak.

The Dragons (12-1) left some burn marks. BNL had turnovers on its first five possessions, battled in front with a sensational run to close the second quarter, then wasted a 9-point lead in the second half and fell behind again early in the fourth quarter. The Stars, with Spreen bounced around like a pinball in the paint, were a little desperate for a hero.

Madisyn Bailey answered the call with back-to-back 3-pointers. Kern responded with arguably the best performance of her career, given the level of competition. Norman and Mallory Pride had key put-away baskets in the late stages. Last time anyone checked, basketball is still a team game, and the Stars were collectively better than the sum of the parts. The Dragons begged someone other than Spreen to do the necessary damage.

“I use resilient to describe these kids,” BNL coach Jeff Allen said after checking to see if he had any hair left on his head from the stress. “I don’t think, by far, that was one of our best days of basketball. But from a guts standpoint, from a resilience standpoint, we stood our ground and fought when we had to. I’m proud of my kids.

“We had other people step in and make plays. That’s what basketball is all about. Sometimes it’s not going to be easy, you have to figure out a way to get it done. That was obvious, they were going to make everyone but Chloe and Karsyn beat them. Those other kids had to make shots. They made enough to get the job done.”

Silver Creek coach Scott Schoen, whose last loss had been against BNL last January, compared the clash to a teasing prom date. “Leaned in for the kiss, and she pulled away,” he joked. Victory was certainly within Silver Creek’s grasp after BNL’s inexplicable start, after the Dragons took a 37-36 lead early in the final quarter.

That’s when Bailey, off a Spreen pass, buried a trey from the corner. That’s when she banged home another bomb – banking one in from the key, sheepishly smiling about it later. “You know what? It doesn’t matter as long as it goes in,” Allen said with a grin. Norman followed with a dash and bank, and Pride turned a steal into a breakaway. Spreen added three free throws to cap the thriller.

Spreen was limited to one field goal (off an offensive rebound) and a career-low six points. Before the encounter, Schoen would have taken that and probably prepared a postgame victory speech. His plan of sending extra defenders like football blitzers when she touched the ball worked to perfection. Except for the part where Kern, Pride (9 points) and Bailey stepped from the shadows to the spotlight.

“Chloe asked ‘What should we be looking to do?,’” Allen said. “If they’re going to send two or three people at you, your teammates have to hurt them. We understood that. We had to get the ball to those people. You have to have those kids.”

The question was, who were those kids the first three minutes? Five possessions, five turnovers. BNL didn’t score until the 4:50 mark and was fortunate the gap was only 12-6 after the first quarter. Emme Rooney’s rebound bucket and Sydney Sierota’s 15-footer gave the Dragons their biggest lead at 16-8, and alarm bells were clanging around BNL Fieldhouse.

“If we hadn’t found some footing in the second quarter, we would have been in a tough spot. They came to their senses. I’m proud of the effort and fight, that’s for sure.”

“We were a little rushed and scrambled,” Kern said. “We got our nerves under control and settled down. It was just a weird night. We never do that.”

The Stars awoke with a vengeance. Norman swished a 3-pointer from the key, Emma Crane scored in the paint off a Norman drive and dish, Kern popped a 6-footer from the baseline. Norman added another trey as BNL finished its 13-1 burst to a 21-17 advantage at intermission.

“We got off to a great start, exactly what we needed to do,” Schoen said. “We had to get out of the gate quick. Then Bedford settled in, and we got away from executing. We kind of shot ourselves in the foot.”

BNL kept the pressure on in the third quarter, extending to a 30-21 lead with Pride’s transition layup, Kern’s wing bomb and another Pride layup off a Kern dish. But then Silver Creek, with championship resolve of its own, came blasting back with a Rooney trey, with a Sierota drive, with post baskets from 6-footer Merideth Wilkinson.

“We could have folded, but we didn’t,” Schoen said. “We played a really good basketball team and fought them until the very end.”

Sierota finished with 12 points while Kynidi Striverson, an Indiana All-Star candidate, totaled 11 during an electric point-guard duel with Norman.

Spreen made an impact in other ways. She grabbed a game-high 11 rebounds as BNL dominated the glass by a 31-19 count. Pride totaled 8 boards. The Stars, after the roughness of the opening minutes, finished with 16 turnovers.

”Our thought process was very simple,” Schoen said. “If we were going to get beat, we had to live with a couple others hitting some shots. That’s what good teams do. They made basketball plays.”

”They were triple-teaming Chloe,” Kern said. “We needed to step up, the people that were getting left open, and make those shots.”