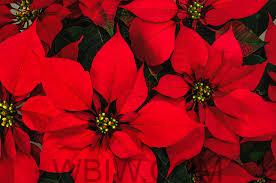 Aside from the Christmas tree itself, no plant symbolizes Christmas quite like the poinsettia. More than 2 million of them will be sold this year, making it the largest potted flower crop grown in the United States.

There are over 100 varieties of poinsettias available in shades of red, pink, white, and yellow – solids, streaked, marbled, and multicolored.

In their native region of southern Mexico, poinsettias flower during the winter season. It’s a perennial shrub that was once considered a weed and will grow 10 to 15 feet tall in the wild. The Aztecs used the poinsettia bracts to make a reddish-purple dye for fabrics and used the sap medicinally to control fevers. The colored “flowers” are actually specialized leaves called bracts, while the true flowers are inconspicuous beads found in the center of the bracts.

There is an old Mexican legend about how Poinsettias and Christmas come together, it goes like this:

There was once a poor Mexican girl called Pepita who had no present to give the baby Jesus at the Christmas Eve Services. As Pepita walked to the chapel, sadly, her cousin Pedro tried to cheer her up.
‘Pepita’, he said, “I’m sure that even the smallest gift, given by someone who loves him will make Jesus Happy.”

Pepita didn’t know what she could give, so she picked a small handful of weeds from the roadside and made them into a small bouquet. She felt embarrassed because she could only give this small present to Jesus. As she walked through the chapel to the altar, she remembered what Pedro had said. She began to feel better, knelt down, and put the bouquet at the bottom of the nativity scene. Suddenly, the bouquet of weeds burst into bright red flowers, and everyone who saw them was sure they had seen a miracle. From that day on, the bright red flowers were known as the ‘Flores de Noche Buena’, or ‘Flowers of the Holy Night’.

However, the credit goes to Joel Roberts Poinsett, the first ambassador to Mexico, for bringing this beautiful plant to the United States and promoting it in other countries. Originally known as ‘cuetlaxochitl,’ Poinsett brought this shrub to the US in 1828. Later when historian William Prescott wrote a book called The Conquest of Mexico, he renamed the plant as ‘poinsettia’ to honor Poinsett who brought the flower to the US and popularized it.

During the Christmas season churches in the west are often decorated mostly with red and white poinsettias. Poinsettias in red and white are widely seen also in Christmas cards. We don’t know how much of the story about Pepita is true. But the beautiful poinsettias remind us that whenever we offer something to Jesus with love, he accepts it and transforms it into a really beautiful thing. These poinsettias also remind us that if we offer ourselves to Jesus with love, he will truly transform us into beautiful people cleansing us from all our sins and shortcomings in our life.

When poinsettias are used for Christmas decoration it is really a reminder of the importance of love in our gift-giving. But above all, it is a reminder of the great love of God in giving us his Son Jesus as a gift for the salvation of the whole world. As we read in the Bible, “God so loved the world that he gave his one and only Son that whoever believes in him shall not perish but have eternal life” (John 3:16).

As the poinsettias are star-shaped, it is also a true reminder of the star of Bethlehem and the great message brought by the angel of the Lord who said to the shepherds keeping the night watch over their flock, “Do not be afraid; for behold, I bring you good news of great joy that will be for all the people. For today in the city of David a savior has been born for you who is Messiah and Lord” (Luke 2:10-11). By having poinsettias for Christmas, we are also sharing our joy with everyone regardless of race, color, and creed since the birth of Jesus the savior is good news for all the people in the world.

For the ancient Aztecs of Mexico, poinsettias were symbols of purity. Hence, poinsettias also remind us of the message of the angels who appeared that night singing “Glory to God in the highest and on earth peace to those on whom his favor rests” (Luke 2: 14). In other words, it is a reminder that we should become pure of heart to receive the gift of peace from God. Since poinsettias are widely used for Christmas, it has become a symbol of good cheer and happiness reminding us that Jesus was born in this world to give us the gifts of peace and joy by giving us forgiveness for our sins.

The red color of the poinsettias has the symbolism of the sacrifice of the crucifixion through which Jesus ultimately brought us the gifts of forgiveness for our sins. During this Christmas, as we are reminded of the great love of God for us in sending his Son as our Savior, let us remember to share our love with others so that it will bring joy to them like the caring love of Pepita brought great joy to baby Jesus through her gift of poinsettias. Have a blessed Christmas!