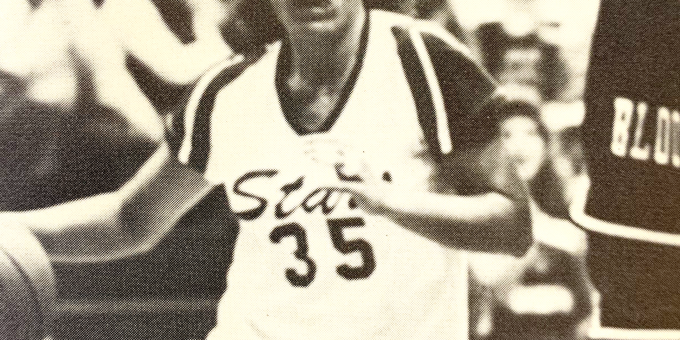 BEDFORD – As a young girl, Kristin would climb to an undisturbed perch in the upper levels of the gymnasium and watch her heroes – her father Pete Pritchett and members of Bedford North Lawrence’s 1983 state championship team – practice and prepare on the court below. That perfect classroom, for a true student of the game, inspired her to chase greatness.

She finished that pursuit, earning basketball’s equivalent of valedictorian. There’s no greater honor than earning immortality in the Indiana Basketball Hall of Fame. Nothing is more appropriate, for Kristin (Pritchett) Messmore played a timeless game.

Messmore was announced as a member of the 20th women’s induction class on Tuesday, adding to the family legacy and BNL’s amazing tradition of excellence. She joined Pete (a 2007 honoree) as the third daughter-father combination in state history to be enshrined, and she’s the school’s sixth selection for the ultimate honor.

“I’m humbled and surprised,” Messmore said. “The thought of the people that are in the Hall of Fame, and little ol’ Kristin from Fayetteville is right there with them. And of course, being there with my dad, that fills my heart. That will be forever with him.”

Messmore’s credentials are impeccable. She scored 1,035 career points (one of eight players in program history to reach that 1K mark) and set the single-game scoring record of 53 points, powering the Stars to four sectional and four regional titles during her career. She later starred at IUPUI, totaling 1,382 points (still 8th on the all-time list). She was a member of the Silver Anniversary Team in 2013.

“That Hall of Fame is full of great players, men and women,” Messmore said. “Just to be a part of that, oh my gosh, my name is in that building with Larry Bird and Steve Alford, the list could go on. Those are big names.”

In BNL basketball history, no name is bigger than Pritchett. Pete, the respected Godfather of the program, guided the Stars to two state titles and two other state runner-up finishes. Kristin loved to watch him work with that ‘83 team, which set the standard for future generations.

“When Dad took the coaching job, I was going into the seventh grade,” Messmore recalled. “And I would go out and sit upstairs, watch practice, then go in and work on what they were working on, by myself. So that 1983 team, I looked at them and their hard work. Those girls are what made me start thinking I could do it. That started my engine running, I was hungry for it. I wanted to be a part of that.

“It was definitely not easy playing for Dad. And he always worried, trying to protect me, not wanting people to think he gave me any favors. Anything that went wrong in practice, it was my fault. But it made me a better player. It taught me to be a well-rounded player. It was a challenge, but I became a smarter player because of it.”

How smart? As a freshman, the year the smaller ball was introduced for the women’s game, she came off the bench in the sectional at Barr-Reeve and immediately noticed the first quarter had been played with a larger men’s ball. The official thought she was crazy. She was correct.

How well-rounded? Messmore led IUPUI in rebounding during two different seasons (not bad for a 5-foot-6 guard) and still ranks in the school’s top 10 for rebounds (fourth with 746), steals (fifth with 230) and assists (sixth with 343). She’s more proud of that than any scoring marks.

“To me, that’s a lot of effort, a lot of hard work, a lot of thinking,” she said. “Shooting the ball isn’t bad, but I wanted my teams to win. I would do what it took to win. There were times my team needed rebounding, and my dad always told me it didn’t matter what size you were. It was your heart and your head. I tried to use my brain. You have to have scoring, that’s how you win the games, but I tried to make a team complete. I took pride in that.”

The 53-point explosion at Terre Haute North was one of those “in the zone games.” And it still ranks as the highest total in school history (Damon Bailey totaled 51 against Jeffersonville in the 1988 regional at Seymour). “That’s the only thing I’ve got on Damon,” Messmore said with a laugh. Playing was always easy. She would later be more nervous watching her children (McKenzie and Austin) on the court.

“I had no idea that was happening,” she said when recalling that performance. “I was in the game, I was focused, I was doing what I knew how to do, and it just happened.”

“Super happy to be a part of that BNL group,” Messmore said. “That’s a good group. If we could all put on our shoes, it would be fun to play with that group.”

They will be officially inducted during ceremonies in Indianapolis on April 30.