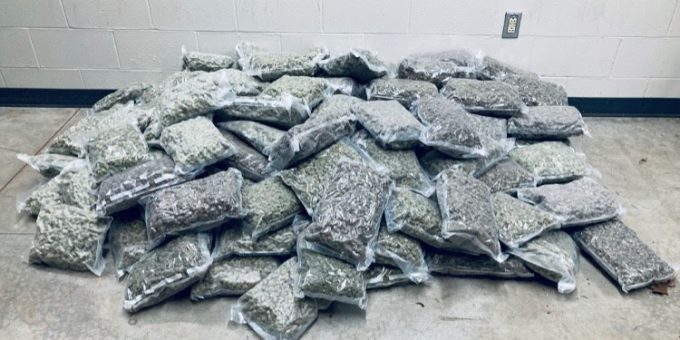 MORGAN CO. – On Saturday, December 11th at approximately 4:20 p.m., an Indiana State Trooper observed a GMC Yukon that was following too close to a tractor-trailer traveling east on I-70 near the 51-mile marker. The trooper stopped the vehicle.

The driver was 39-year-old Alvaro Lopez-Chacon, of Costa Rica.

During the course of the traffic stop, the trooper observed criminal indicators and requested a canine.

Trooper Kyle Hall and his canine Barker, from the ISP Putnamville Post, arrived.  Barker alerted troopers to possible drugs in the vehicle.

A subsequent search of the vehicle discovered that Lopez-Chacon was transporting 133 pounds of marijuana.

Alvaro Lopez-Chacon was detained and transported to the Morgan County Jai on charges of dealing marijuana and possession of marijuana.

The estimated street value of the marijuana seized is estimated at more than $300,000.