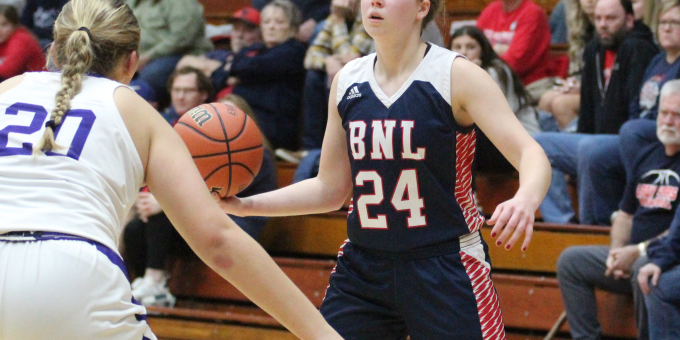 BEDFORD – After a three-game, eight-hours-on-the-bus road trip through the middle of the Hoosier Hills Conference, with smoldering in its wake like Sherman’s March to the Sea, Bedford North Lawrence finally returns home. In Roman days, the conquering heroes were welcomed with a triumphus celebration.

The Stars will just find more challenges awaiting in BNL Fieldhouse. The five-game homestand starts with dangerous Brownsburg. So there will be no chariots through the streets, no festival for the successful completion of the foreign conquests. Back to work.

No.4 BNL (9-1 and still unbeaten against Indiana competition) will face the defending semistate champion on Saturday night. Brownsburg (6-5) is certainly better than the pedestrian record indicates, even with the departure of star Ally Becki (who joined BNL coach Jeff Allen and BNL’s Chloe McKnight on the Indiana All-Stars). In fact, this rivalry is almost a family affair, as Brownsburg’s Debbie Smiley coached BNL Miss Basketball Jorie Allen for the 2019 All-Stars.

These Bulldogs have veterans back from last year’s deep tournament run, most notably senior Miya Webb, who hit the game-winning 3-pointer at the buzzer during Brownsburg’s thrilling 43-42 triumph over the Stars last season. And Brownsburg brings a three-game winning streak, plus an uninterrupted week of preparation for this rematch.

“I think they’re better than their record because of the competition they play,” Allen said. “They pose some problems for us. They have some size, they have some athletes.”

Brownsburg’s overall numbers don’t leap off the stat page, with junior guard Kailyn Terrell (10 points per game) as the leading scorer. Senior forward Novalee Glass contributes 8 points, and 6-5 freshman Avery Gordon is a force in the paint at 7 points per game.

But each has enjoyed explosive performances of late. Terrell had 20 points during a 56-50 win over Class 3A No.8 Salem in the same Shootout where BNL fell to Fremd (Ill.), Gordon had her second double-double of the year with 20 points and 10 boards during a 49-43 win over Tri-West, and Glass shattered Franklin Central with 21 points while powering the Bulldogs to a 40-29 victory.

“We are playing good team basketball and have great team leadership,” Smiley said. “Kailyn has done a nice job of stepping into the point guard role and has played well in big games. We rely heavily on Miya’s defense, and Avery has contributed nice minutes, providing points and rebounds as a freshman.”

Brownsburg averages only 41.6 points per game, and that plays directly into BNL’s strength. The Stars have been a disruptive defensive force, allowing only 34.9 per game. They smothered Seymour on Thursday, giving up only 26 points, the fourth opponent that failed to crack the 30 mark.

“If we play well, if we can duplicate the defensive effort, it will make it really tough for them,” Allen said. “But we’ll have to make shots. It will be a game where we have to play well. If someone is playing a zone, and you don’t make shots, it makes it difficult. We have to do that, there’s no doubt.”

That’s been the only real BNL issue thus far. At times, hotter than the furnace in winter, at times colder than the Arctic wind. The Stars are shooting 41.8 percent for the season, (including 34 percent from long range), but they were only 2 of 17 from distance against the Owls. Of course, when they force 19.6 turnovers per game, that creates extra shots and easy transition baskets.

Chloe Spreen continues to lead BNL in scoring (17.3) and rebounding (5.7), while Karsyn Norman adds 14.8 points. Mallory Pride has been busy on the boards of late, totaling 23 rebounds the last two games.

Spreen had 19 points and McKnight added 13 against Brownsburg last season, but the Stars shot a miserable 28 percent during that setback. Becki led the Bulldogs with 14 points.

Last meeting: Last year at Brownsburg, Miya Webb hit a deep 3-pointer at the buzzer as the Bulldogs stunned the Stars 43-42. Chloe Spreen had 19 points for BNL, while future Indiana All-Star Ally Becki had 14 for Brownsburg.

Game notes: BNL has won two of the three meetings in the short series. Brownsburg is the defending semistate champion. Brownsburg coach Debbie Smiley coached the Indiana All-Stars in 2019 when BNL’s Jorie Allen was Miss Basketball.