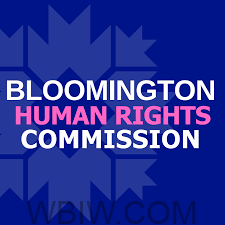 BLOOMINGTON – The Bloomington Human Rights Commission (BHRC) is seeking nominations for its 2022 Human Rights Award, recognizing an individual or group that has made specific, significant contributions to improving civil rights, human relations, or civility in our community. Nomination forms are available by clicking here.

The recipient(s) of the BHRC’s Human Rights Award will be honored at a public ceremony.

The BHRC especially welcomes nominations demonstrating success in ensuring rights to equal access to housing, employment, or education; in ensuring equal access to community life for people with disabilities; and of people or organizations who have done exemplary work and advocacy in increasing civility in our community.

“The work of creating greater equity and social justice is ongoing, and requires all hands on deck,” said Mayor John Hamilton. “With this award, Bloomington’s Human Rights Commission lifts up the individuals and organizations in our community who are working in the trenches every day to protect human and civil rights, combat prejudice, champion democracy and make Bloomington a more just and equitable place.”

“Bloomington is the beacon for human rights relations in the State of Indiana,” said HRC chair Ryne Shadday. “However, it does not mean that we are perfect and have achieved true equality for everyone in our community. Every person deserves fair and equal treatment, and no one deserves to have factors such as race, ethnicity, LGBTQ+ status, disability, housing or familial status determine their treatment. As we strive to become a more just community, we are proud of those who have long championed these causes and wish to reward those who have made such an impact in Bloomington, the state, and our nation.”

Bloomington’s human rights record has received national recognition. For the last seven years, Bloomington has been annually awarded a perfect score by the Human Rights Campaign on its Municipal Equality Index (MEI), the only city in Indiana to do so. The index evaluates how well a city supports the LGBTQ+ people who live and work there through its laws, policies, and services.  More information about Bloomington’s score for 2021 is available here.

The mission of the BHRC is to protect human rights in Bloomington. The HRC is designed to enforce Bloomington’s Human Rights Ordinance in a fair and timely manner, to educate community members about their rights and responsibilities under various civil rights laws, to raise awareness on all human rights issues, to ensure that contractors and subcontractors on City jobs pay employees applicable common wages, to ensure that the City, as an employer, governmental entity and provider of public accommodations, complies with the Americans with Disabilities Act (ADA), and to provide the community with information about the ADA.