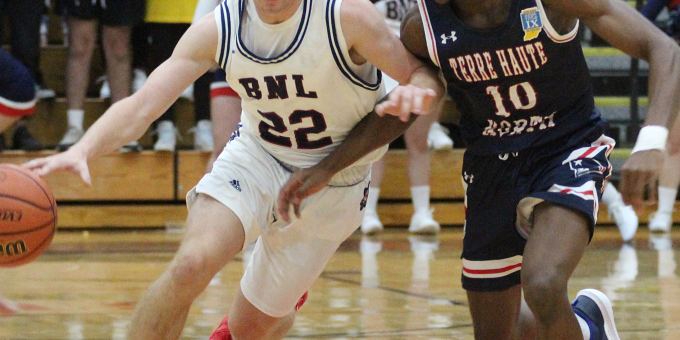 BEDFORD – As Columbus East’s Brent Chitty prepares to coach his 600th career game, his first concern is the health of his team. Hard to practice, difficult to maintain continuity and improve, with so many athletes out with various illnesses. It’s been a long week.

No matter how sick some of the Olympians have been, Bedford North Lawrence’s offense has felt worse. The Stars, winless at this point for the first time in seven years, hope to find the cure on Friday night when they open Hoosier Hills Conference action against East.

BNL (0-3) has done so many things well, given the lack of size and experience. The Stare have defended fiercely, allowing only 48 points per game, they have given maximum effort with minimum mistakes. But that’s been overshadowed by the offensive shortcomings, the glaring reason for the record and the worry.

“We haven’t been very good offensively,” BNL coach Jeff Hein said. “We have to find a way to get our offense going, I don’t care who we’re playing. I don’t care how well we defend, how well we do the other things, until we resolve the issue on the offensive end, we won’t win any games.”

The Stars are averaging only 36 points per game, shooting 33.9 percent overall. Junior guard Colton Staggs leads the way at 17.3, but no one else is threatening double figures. They’ve scored more than 10 points in only two of the 12 quarters. Help will arrive soon, with junior Colten Leach now practicing and approaching his debut while recovering from knee surgery. In the meantime, somebody needs to contribute more. Kaedyn Bennett is totaling 7.8 and Trace Rynders adds 5.3.

“We have to have kids steps up, be willing to look at the rim and score,” Hein said. “We can’t rely so much on one kid. He can’t do it all, we have to get him some help from other places. That’s a key.

“They’re putting a lot of pressure on themselves. The big thing is taking that pressure off, understand we’re not in Afghanistan getting shot at right now. We’re playing basketball, so if we miss a shot it’s not a big deal. We have to look to score. It’s like we’re too timid. We have to get more aggressive. A lot of it is youth and inexperience, it’s shell shock right now. We’re not making an excuse, but we are young and we’re playing teams that have been there and done it. We have to learn to adapt.”

East (1-4), when it’s operating at full strength, has multiple weapons with senior guard Will Rieckers (averaging 14.8 the last four games) able to attack the basket, with junior guard Ben Sylva (14.3) able to score on the move, and junior forward Julius Dailey (11.0) hitting jumpers from the perimeter.

BNL won last year’s game 68-66. Kooper Staley had 26 points and Leach totaled 24 for the Stars, while Jacob Pierce had 20, Daniel Murphy added 15 and Tyler Boyer totaled 15 for East. Hein called that “a street ball game, at least street ball the way I see it,” he said. Why? Very little defense was played.

The Stars will have to rely on their defense, on their tempo control, on some equality on the boards (BNL has been outrebounded by 6 per game) in order to continue to compete while plugging holes. Winning would cure a lot of ills.

“The Stars have Hein’s signature written all over them,’ Chitty said. “Hard-nosed defense. Great toughness. And very disciplined offense.”

“We’ve been in all three games, we had a chance Saturday night (against Terre Haute North), to get ourselves over the hump,” Hein said. “We were in there longer than any other game, we just weren’t able to make the big play. It’s not the end of the world, I see growth in this team every day. They’re getting better.”