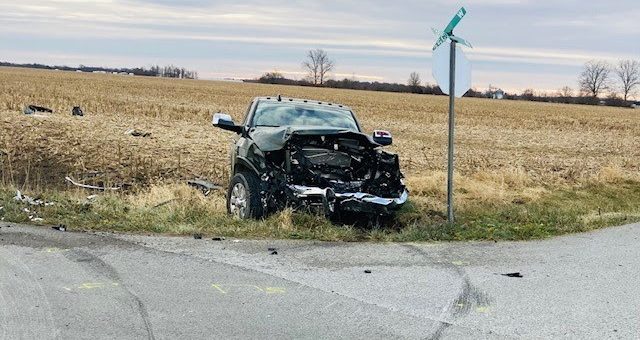 SULLIVAN CO. – The Indiana State Police are investigating a crash between a pickup truck and passenger vehicle that occurred on Tuesday, at the junction of County Road 300 North and County Road 350 West, that claimed the lives of a mother and her young daughter.

Preliminary investigation by ISP Master Trooper Polly Blackburn indicates that at approximately 7:20 a.m., a 2021 Dodge pickup truck driven by 62-year-old Gary Ferree, of Sullivan, was traveling south on County Road 350 West.  Ferree failed to yield at the posted stop sign located on the north side of the junction. He continued traveling south and proceeded into the lanes of County Road 300 North, forcefully striking a 2008 Lincoln driven by 38-year-old Ashley Hedden, of Sullivan. Hedden was traveling east.

The momentum of the collision caused the vehicles to propel to the south side of the intersection and off the roadway.  Both vehicles came to a final stop at this location, with the Lincoln rolling onto the driver’s side.

The driver of the Lincoln, Ashley Hedden, and her daughter, 10-year-old Grace, who was a passenger in the vehicle, both succumbed to their injuries at the scene.  A second daughter who was also a passenger in the Lincoln was transported to the Sullivan County Community Hospital for immediate medical treatment.

The accident is being reconstructed by Senior Trooper Tim Rader of the Putnamville State Police Post with the assistance of other troopers.

Drugs and alcohol are not believed to be contributing factors in this accident.