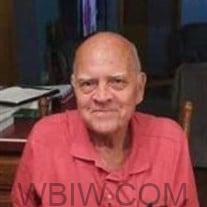 Jr. was a lifelong business owner, auctioneer, and former Town Marshall. He was a member of the St. Mary’s Catholic Church; the Eagles #2442 where he was a past president; past Chairman of the Martin County Republicans; appointed KY Colonel in 2001 and was the Grand Marshall of the 2021 Catfish Festival. Jr was also a former Town of Shoals Council Member.

He was preceded in death by his parents; wife; one daughter, Theresa Ervin; and great-granddaughters, Hope Day and McKenzie Salmon.

The funeral service will be at 1:00 p.m. on Friday, December 10, 2021, at the Queen-Lee Chapel of Thorne-George Family Funeral Homes, with Pastor John Ziegler and Pastor Mark Hamaker officiating. Burial will follow in the Albright Cemetery. Visitation will be from 3 p.m. until 7 p.m. on Thursday at the funeral chapel.