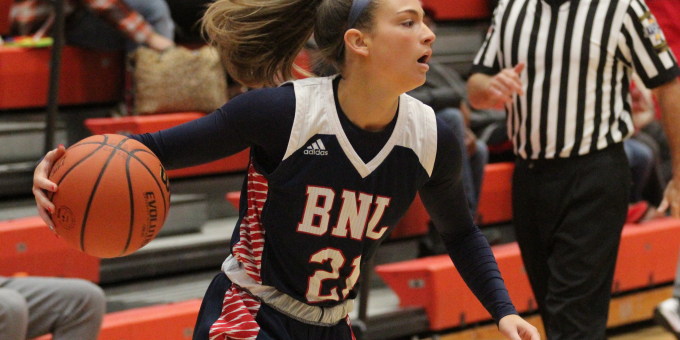 NEW ALBANY – While no icicles were hanging from the rafters of Doghouse, New Albany might have won the prize for the coldest arena in the state. And Bedford North Lawrence could certainly see the hot breath of a challenge in the air.

Maleea Roland heated up the place, that’s for sure. She hit enough 3-pointers to start a wildfire, one that threatened to consume the No.4 Stars in a fast-moving blaze. BNL, with upset alarms beeping like smoke detectors, needed an extinguisher. Perhaps cold hands do mean a warm heart, because the Stars found their heartbeat to subdue the firestorm.

While BNL never did completely douse the hottest shooter in the meat locker that was doubling as a basketball court on Saturday afternoon, the Stars did flip on the furnace switch, warming up to push aside the Bulldogs 58-45. Karsyn Norman scored 18 points as BNL (8-1, 3-0 in the Hoosier Hills Conference) took another step toward the league title.

Roland, New Albany’s streaky and deadly shootist in the backcourt, was never better, hitting five first-half treys while powering the Bulldogs to a 24-19 lead midway through the second quarter. BNL responded with a 14-0 run to finish the half and restore the expected balance of power. But the Bulldogs (4-6 with five straight losses) got the attention of the league leader and earned some respect.

“Conference teams, we bring out the best in them,” BNL coach Jeff Allen said. “The other team is trying to win, too. Sometimes you have to fight and work for it. The kids hung in there and did that. That didn’t look like the same team we saw on film, but we do that to people. They compete against us. And we understand that. You have to meet it. We found a way.”

The way home was the 3-point line. The Stars hit four from distance during the turning-point run, with Norman igniting the charge with back-to-back bombs. Carlee Kern added a couple over New Albany’s zone, and Chloe Spreen converted a transition basket off a Norman steal as BNL escaped to the sanctuary of halftime with a 33-24 lead.

BNL extended to a double-digit margin in the third quarter, with a Norman steal for a bucket, with Mallory Pride’s offensive rebound, with another Kern trey off an Ella Turner rescue of a miss. New Albany slashed the 15-point margin to six very quickly, with Roland breaking free for two more treys and Taylor Treat adding another. But Spreen – quiet until this point – buried two mid-range jumpers and converted at the foul line to keep New Albany at arm’s length.

Spreen finished with 14 points, but Kern was a catalyst with a career-high three treys and 11 points. Pride was a missed layup away from a double-double with 9 points and a career-high 10 rebounds.

Roland finished with 26 points, hitting seven treys, while Treat totaled 11. Journey Howard and Anasha Crowdus both had 9 rebounds, and the Dogs had the early advantage on the offensive glass (with 7 second chances in the first half). BNL actually did more damage from long range with 10 from the bonus line, but Roland was a constant antagonist.

“We tried different people on her, and she had a great day,” Allen said. “Some of those were deep with a hand in her face.”

“When somebody is hot, we will continue to get them the ball,” New Albany coach Shelby Gliebe said. And she had to smile when seeing the potential of her backcourt come to life against the best in the conference. New Albany has lost the last seven against the Stars, but this one was a true confrontation at eye level, rather than the two 30-plus blowouts of last season.

“I knew we could bounce back,” Gliebe said. “It was a big test. To be able to put a complete game together, this was the day to do it. We wanted to take Spreen out of it as much as possible. She’s a great player, you can’t hold her down. Other players got hot.”

BNL’s shooting percentage was as chilly as the gymnasium (19 of 52 overall) but the four-pronged fork attack of point production was crucial against the spread zone.

“That’s what it’s going to take sometimes,” Allen said. “It’s not going to be easy all the time, especially on the road. Sometimes we have to work a little harder for it. We made enough plays to get it done.”

BNL will finish its three-game conference road trip at Seymour on Thursday.