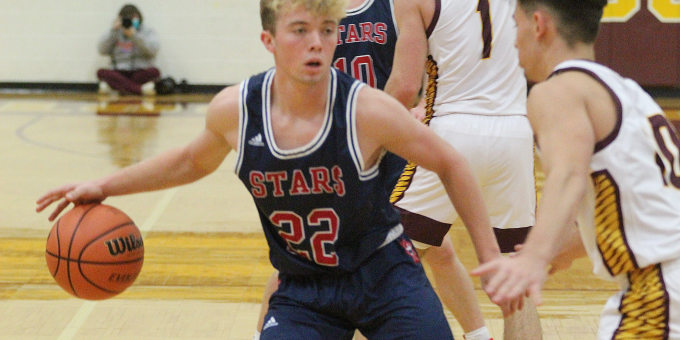 BEDFORD – Terre Haute North, off to its best start in four years, will face its first road rest of the season when the Patriots journey to Bedford North Lawrence on Saturday night.

North (2-0) owns victories over Mooresville and Evansville Central for momentum as it seeks to end a four-game losing streak to the Stars.

“We are off to a good start but have a long way to go,” North coach Todd Woelfle said. “This will be our first road game, so it will be interesting to see how we handle being in that environment. BNL is always a difficult place to win.”

BNL’s current streak over the Patriots includes two overtime wins, capped by last year’s 50-45 triumph that kickstarted the Stars toward a 14-win campaign. Kooper Staley (12 points), Ben Cosner (11) and Colten Leach (11) were the stars that night, but none of them will see the floor in this rematch. BNL, with Leach still recovering from knee surgery, will have to count on offense from juniors Colton Staggs and Kaedyn Bennett.

“They are a difficult matchup because they have multiple guys who can shoot the 3, and Colton Staggs is an excellent driver,” Woelfle said. “Staggs had a monster game against us in June (during summer scrimmages). Coach (Jeff) Hein does a good job and we will need to be locked in on both ends for 32 minutes if we’re going to be successful.”

The Patriots will have a key advantage. They have had all week to scout and prepare for the Stars, while BNL will be coming off Friday’s clash with rival Bloomington South. North’s leaders include senior forward Mark Hankins (20.5 points after scoring a career-high 29 during the 60-50 win over Central) and 6-5 senior Colin Frank (8.0).

“I hate that,” Hein said. “That’s such an advantage for them, and it’s a trap game for us after playing South.

“They’re playing really well. They have nice players inside, Hankins can score out on the floor. They’re deep, so they’re similar in a lot of ways to South. It will be another challenge.”

Last meeting: Last year at North, with no fans allowed in attendance, the Stars topped the Patriots 50-45 in overtime. Kooper Staley had 12 points while Ben Cosner and Colten Leach totaled 11 for BNL. Matt Gauer had 23 points for North.

Game notes: BNL has won four straight in the series, two of those in overtime. The Patriots are 2-0 for the first time since 2017-18.