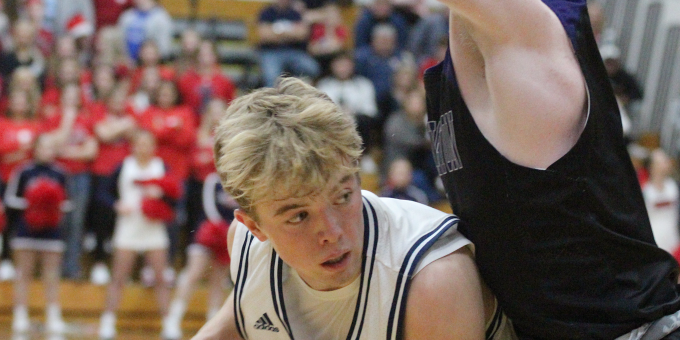 BEDFORD – Some victories are works of art, basketball masterpieces worthy of framing, with flawless brush strokes of artistic genius, with breathtaking colors and texture. The image is immortalized, the famous ones are unforgettable, like da Vinci’s Last Supper or Mona Lisa, Michaelangelo’s Sistine Chapel, or Van Gogh’s Starry Night.

And then there’s Bloomington South’s latest conquest of Bedford North Lawrence. Hopefully all evidence of the 33-24 triumph will be erased from history. This game was the runt of the litter, the winner of the ugliest dog contest, a 5-year old grandkid’s scribbled and haggard artwork hanging on the refrigerator. Something only the winner could love.

Actually, the opposite was true. South coach J.R. Holmes, a victor in this series for a remarkable 18th straight time, left BNL Fieldhouse wearing a coat of disappointment, while BNL coach Jeff Hein was consoled by the sheer grit and tenacity of the Stars. He could look at that every night, if only his team would add a few soft brushes of the twine to the constant clanging of the iron.

As the final score indicates, offense was a rare part of the contest. South’s Tyree Rochell, the best athlete on the court, scored 18 points as the 10th-ranked Panthers (3-0) found a way to discard the pesky terriers that kept nipping and barking. The real reason South won was the other end, where BNL (0-2) crumbled into dysfunction while the Panthers came within a field goal of setting the most dubious of BNL records.

The school record for fewest points scored is 23, during that infamous overtime clash with stalling Loogootee during the 1981-82 season. The Stars shot like three blind mice. Did you ever see such a sight in your life? BNL was 8 for 36 (22 percent) overall, a miserable 4 of 11 from the foul line, and somehow kept South sweating and scrambling.

Colton Staggs had 18 points for the Stars, but everyone else was 2 of 18 from the field. It’s a miracle the difference wasn’t much greater.

“We did a lot of things right,” Hein said. “We just have to find a way to get the ball in the basket. These kids are trying. Our kids are scrapping. There were a lot of positives. But shooting is a big . . . part . . . of the game. Period.”

BNL definitely earned points for effort, for defensive toughness, for ball control and tempo. The Stars had only 5 turnovers, they frustrated South with their willingness to probe the perimeter for long intervals, they had an answer for everyone except Rochell.

Two critical time spans were the difference. The first was BNL’s final possession of the first half, when a turnover led to a Aiden Schmitz 3-pointer at the buzzer for a 16-10 lead. Instead of a one-possession game, South went up 9 when Patrick Joyce started the third quarter with a wing trey. Those 9 points might as well have been 29.

The second came midway through the fourth quarter. BNL trailed 25-19 and had three chances to dig closer. Couldn’t convert.

“We got good shots, they just didn’t go in,” Hein said. “They’re tough defensively, but I’d like to think they’re saying the same thing about us (and they were). It was a battle of two hard-nosed defensive teams. We just didn’t make enough shots. We had opportunities to score and got good looks.”

Rochell was the only true highlight maker. He bombed two 3-pointers in the first quarter, then went to work in the paint in the second half. He’s a recent transfer from Bloomington North who doesn’t yet fully grasp the South system, but he made plays off sheer athletic advantage.

“No question, he was a tough matchup for us,” Hein said. “He was the difference maker.”

“He made two or three plays just from being an athlete,” Holmes said. “He really doesn’t know what we’re doing.”

Holmes understood exactly what BNL wanted – slow the game, dribble and drive until someone’s patience slipped, stay close. That worked to a degree, with Staggs having the ball in his hands about 75 percent of the time.

“It’s really hard to play against a team that wants to try to get to the fourth quarter,” Holmes said. “They don’t want to make it an up-and-down game, I understand that. I thought their kids played really hard and stuck to what he wanted them to do. I don’t like the way they did it, it makes an ugly game, but they did what their game plan was. They rode Staggs to the finish line.“

Joyce added 8 points for South, which didn’t set any fires with its shooting either (11 of 26 overall, 6 of 12 at the line). The Panthers, other than Rochell, didn’t get any additional style points.

“They ought to give the money back,” Holmes quipped about the tickets that were purchased. “When you go on the road, most of our kids have never played here. It’s a tough place to play, they play well at home. I’m glad we won, but I’m disappointed in the way we played.”

After Staggs, Kaedyn Bennett hit a first-quarter trey and Jett Jones had a second-quarter layup. And that was it.

“We’re too one-dimensional on the offensive end,” Hein said. “We have to get some help for Staggs. We’re doing with what we’ve got. They’re playing hard. I’m not going to go in there and do a Bobby Knight in the locker room. We played hard, as hard as we can play, as smart as we can play, as together as we can play.

“But how much fun are these kids to watch play? They battle, they fight, they overcome a lot of obstacles. Eventually good things will happen, we’ll find a way to get one at some point and time.”

BNL hopes that point – and those points – will come on Saturday night when the Stars welcome Terre Haute North.