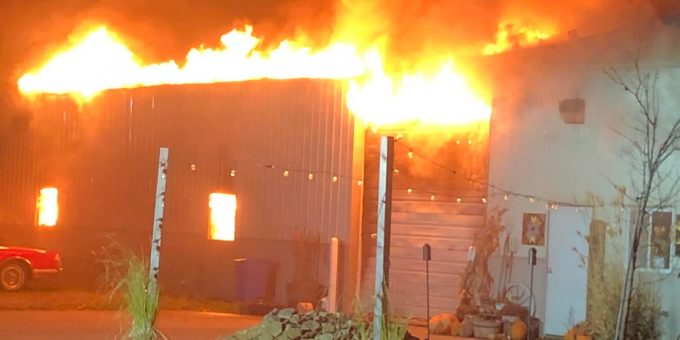 BEDFORD – On December 1, 2021, at 1:01 am Pleasant Run Fire Department along with mutual aiding partner Shawswick Fire Department were dispatched to a barn and residential structure fire at the home of Hunter Hamilton and Bret Roberts at 1148 Todd Lane.

Pleasant Run and Shawswick Fire Departments initially responded to the call. While en route a third fire department was dispatched to assist with manpower and water supply. Upon the arrival of the Pleasant Run Fire Department, Chief Chad Hillenburg assumed incident command.

Upon arrival, the initial assessment of the fire was a well-involved pole barn style build that was approximately 50x100x16 with a residential living area on the north end of the building. During scene assessment, Chief Hillenburg determined that additional resources would be needed to extinguish the fire.

Therefore, dispatch was asked to make sure a minimum of 6 water tenders were en route to maintain the water supply on the scene. Firefighters attacked the fire in a defensive operation only, due to signs of deterioration of the building’s main structural components. Signs of a sagging roof and bowing walls were the leading consideration of defensive operations.

All occupants were reported to be out of the building upon arrival. One of the occupants, Hunter Hamilton, did suffer burn related injuries and was transported to the hospital by a personal vehicle after being assessed by medical personnel at the scene.

Several firefighters worked diligently to extinguish the blaze in just over 3 hours.

Approximately 50,000 gallons of water were used to extinguish the fire. Twenty-nine firefighters and 14 fire apparatuses were utilized while battling the blaze.

By 5 a.m. all personnel had been released from the fire scene.

The cause of the fire remains under investigation. Chief Hillenburg says the fire is not being considered suspicious at this time.