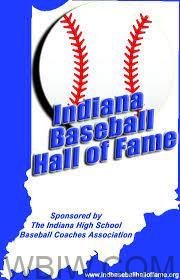 INDIANA – The Indiana High School Baseball Coaches Association has released its Hall of Fame class for 2021-2022. Due to the COVID environment that existed in 2021, the induction ceremony did not take place as the state clinic was held in a virtual format. The 2021 and 2022 classes will be honored at a joint ceremony at the IHSBCA state clinic on January 15, 2022.

The ceremony will be held at the Sheraton at Keystone Crossing in Indianapolis, IN at 7:00 PM. Tickets can be purchased here.

The induction ceremony is a part of the three-day IHSBCA state clinic and clinic and room reservation information are available at www.ihsbca.org.

The 2021 class includes one coach, Chris McIntyre of New Albany HS; and one contributor/umpire, James Robinson; along with the Veterans Committee nominee Bernie Allen.

The 2022 class includes one coach, Steve Strayer of Crown Point HS, and one player, Jamey Carroll.

Chris McIntyre graduated from Jeffersonville High School where he played for Hall of Fame coach Don Poole. He received his BS and MS degrees from Indiana University Southeast. He began his coaching career as an assistant coach at Clarksville High School under HOF Wayne Stock.

Coach McIntyre has been the head coach at New Albany High School for 25 years where his teams have gone 533-218 during that time. His teams have won 5 Hoosier Hills Conference titles,10 sectional championships, 1 regional title while reaching the final 8 three times. He is a 4-time District Coach of the Year and 5-time Conference Coach of the Year.

Chris was the 2014 IHSBCA President, has served on numerous committees, and has been an All-Star coach three times. He has coached 13 South All-Stars; over 40 players have gone on to play college baseball; had 3 players drafted and 2 players reach the major league level.

Chris and his wife Shannon have two sons: Tyler and Kevin. He currently teaches Math at New Albany High School.

James Robinson graduated from Harry E. Wood High School in Indianapolis and from Indiana University
Kokomo. He played one year of baseball in high school.

He started umpiring high school baseball in 1980 and his career lasted for thirty-five years. During his career, he worked 33 sectionals, 25 regionals, 14 semi-states, and six State Championships. He has umpired six IHSBCA North-South series and was voted IHSBCA UOTY five times.

James has been a high school and college referee in football. He worked six years in Division II and seven years in the Mid-American Conference. He has also refereed the state basketball finals and the state football finals.

Later in his career, he became a replay official for the MAC and then moved to the Big Ten. He was a replay official in the National Championship game in 2014 at the Rose Bowl between Florida State and Auburn.

James and his wife, Nada, deceased, has one daughter, Chiquita, and one grandson, Kameron.

Bernie Allen played his collegiate baseball in West Lafayette for the Purdue Boilermakers, where he was twice named team MVP. A winner of 6 varsity letters, he was also the quarterback on the football team and was team MVP in 1960.

As starting QB in 1960, he guided the Boilers to wins over #12 ND, OSU, and #1 Minnesota (AP and UPI national champion); while also outdueling Fran Tarkenton in the annual Blue-Gray game. In the spring of 1961, his collegiate career ended after being named an All-American shortstop…. he then signed with the Minnesota Twins.

Bernard Keith “Bernie” Allen played for the Minnesota Twins, Washington Senators, New York Yankees, and Montreal Expos. At 6′ 0″ and 185 lbs., Allen was a second baseman for most of his career; playing over 900 games at the position. By the 1971 season, he was splitting his time between second and third base.

On Opening Day, April 10, 1962, Allen made his debut for the Minnesota Twins at second base. He was put into a position vacated by Billy Martin a week earlier. Allen had one hit (a triple) in four at-bats on opening day. His rookie performance led to a selection to the 1962 Topps All-Star Rookie Roster and finished 3rd in Rookie of the Year voting, finishing behind Tom Tresh and Buck Rodgers.

Allen played five seasons for the Twins and was traded to the Washington Senators with pitcher Camilo Pascual for pitcher Ron Kline. After five seasons in Washington, the Senators moved to Texas and traded him to the New York Yankees.

Allen played for New York in 1972, backing up second and third base. He played 17 games for the Yankees in 1973 before being purchased by Montreal. The Expos released him two months later.

After baseball, he was in the sporting goods business in West Palm Beach and the owner bought a baseball team that Bernie helped coach with manager Felipe Alou. They played together with the Yankees and Expos. That team won the Florida State League and then Alou went on to manage in the majors. He then moved back to Ohio and worked for Ferro Corp for 17 years in East Liverpool, the pottery capital of the world. He moved to Carmel in the mid-80s and has never left. He and his wife play a lot of golf!

In 1999, he was selected in the Purdue Intercollegiate Athletics Hall of Fame.

Bernie has been married for a total of 51 years and has a son; three daughters; a step-son and step-daughter; 16
total grandkids; and three great-grandkids.

Jamey Carroll is a 1992 graduate of Castle HS and was coached by Chuck Hawkins. His number was retired by Castle HS, and he was a 1992 South All-Star. He played collegiately at the University of Evansville for Jim Brownlee. He graduated in 1996 and was an All-American that same year. His name appears 27 times in the U of E’s baseball record book. In 2021, the number 23 was retired by the university.

Some highlights from his MLB career are scoring the last run in Expos history; leading NL 2B in fielding percentage in 2006, and in 2007 he scored Matt Holliday with a sacrifice fly to win the NL Wild Card game. Jamey is recently retired from the Pittsburgh Pirates where he spent 4 years as a Special Assistant and 3 years as Defensive Coordinator.

He is his wife Kim has 13-year-old twins: Cole and Mackenzie.

Steve Strayer attended Prairie Heights HS and received his bachelor’s degree from Manchester College and master’s degree from Indiana University Northwest. Coach Strayer’s teams have won 641 games with only 236 losses; 15 conference titles; 14 sectional championships; and 9 regional crowns. He has coached 13 Indiana All-Stars. 64 players have gone on to play college baseball (23 Division I). Steve has been named district coach of the year in 1996, 2000, 2002, 2003, 2007, and 2019.

He began his coaching career at Boone Grove HS and won 223 games in 10 seasons, along with 7 Porter County Championships. Steve is currently the head coach at Crown Point High School and is beginning his 20th season as coach of the Bulldogs. His teams have won 418 games and numerous sectional and regional titles to go along with 8 Duneland Athletic Conference titles. He served as IHSBCA President during this time and was a 2005 and 2021 North All-Star coach.

Coach Strayer teaches Mathematics at Crown Point High School. He resides in Crown Point with the love of his life Jennifer and his beautiful daughter Charlotte.