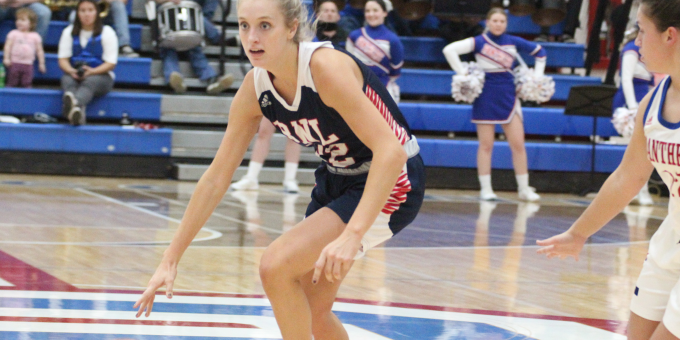 BEDFORD – After draining the emotional tank during the recent streak of high-profile clashes with ranked rivals and challengers to the conference hierarchy, Bedford North Lawrence’s mental maturity will be tested as the No.4 Stars continue their three-game road trip in the Hoosier Hills Conference.

BNL, sitting securely atop the standings in the early stages of the league race, will journey to New Albany for the middle leg of the tripod trial on Saturday afternoon. The Stars (7-1 overall, 2-0 in the HHC) are coming off their most important victory of the season, now they must summon the same intensity and energy to avoid the dreaded letdown for the encore.

The Bulldogs (4-5 overall and making their league debut) will certainly be inspired. They suffered a pair of blowout losses against the Stars last season. So while the lack of poll points and pedigree might not cause frowns or fear, New Albany deserves respect for its talented backcourt. BNL needs to maintain its high-level performances. Nothing can be taken for granted.

“The challenge is always to play at your level,” BNL coach Jeff Allen said. “It doesn’t matter who we’re playing or what their record is, we have our level. That’s the focus going in. We’re playing pretty well right now.”

BNL definitely owns momentum after the impressive 50-34 victory at No.10 Jennings County earlier this week. The Panthers were poised to pounce, seeking a streak-busting triumph and the addition of a ‘wow’ win to their legitimate resume. The Stars dominated with defensive excellence, holding JC scoreless for over 8 minutes, while stars Chloe Spreen and Karsyn Norman added the offensive fireworks.

“I thought Jennings County came out inspired, and sometimes you have to withstand that,” Allen said. “Our kids did a good job of that. I thought the pace of the game was perfect for us, and that’s what we’re looking for. We were pushing it when we got stops – and it all starts from getting stops – but if we didn’t have anything we were really patient about probing the zone and trying to get a good look. That’s maturity. That’s a big part of the growing process.

“We had a little more fight. That was missing a little bit on Saturday (during the loss to Fremd, Ill.), but you could see it in our kids’ faces on Tuesday.”

Spreen, a recent addition to the Naismith underclassmen watch list for national player of the year, leads BNL in scoring (17.5) and rebounding (5.1), Norman is adding 14.3 points, 3 assists and 3 steals. BNL is at its best when sophomore Madisyn Bailey (6.1 points, 4.3 rebounds), sophomore Mallory Pride (6.6 points) and senior Carlee Kern contribute on both ends, as they did against Jennings.

New Albany, struggling with four straight home losses, will depend on guards Maleea Roland (16 points, 7 rebounds) and Taylor Treat (averaging 13) to counteract BNL’s perimeter firepower. Fast starts are always a key on the road, and BNL did that twice against the Bulldogs last season, blasting to big early leads en route to 73-34 (during the regular season) and 78-44 (in the sectional opener) victories.

“That’s always something you want to do,” Allen said. “They like to run, and that plays well into what we have. We like to run, we just have to make sure we’re disciplined and do the things we’re supposed to be doing, don’t get wrapped up in a helter-skelter contest with them.

“New Albany is athletic and poses some challenges. We match up well defensively, but rebounding will always be a big focus, not giving the second and third opportunities. Treat and Roland can both score.”

Last meeting: Last year the Stars swept two games from the Bulldogs, winning 73-34 during the regular-season game at BNL, then posting a 78-44 victory in the sectional opener.

Game notes: BNL has now six straight in the series and 22 of the last 25 meetings. The Stars rank 9th in Class 4A in scoring defense, surrendering only 34.8 points per game.