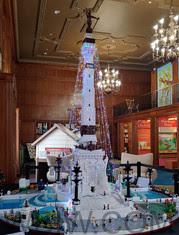 INDIANAPOLIS – Visitors to the Indiana State Library’s Young Readers Center can see a startlingly accurate recreation of one of the Circle City’s most cherished and iconic monuments.

For the third time, the Young Readers Center is hosting a 7-foot-tall Lego replica of the Soldiers and Sailors Monument that resides in downtown Indianapolis. The sculpture will be on display until Feb. 14, 2022.

Indiana artist Jeffrey Allen Smythe of Center Grove used more than 75,000 Lego pieces to build the replica monument. The initial construction back in 2017-2018 lasted 15 months, including three months of planning and sketching. Pieces used to create the sculpture, which includes a roughly 6-foot circular base area, were obtained from existing kits, Goodwill stores, auction houses, and online retailers and resellers. The piece was constructed at a 1:48 scale to accommodate Lego mini-figures.

Smythe, who attended the Herron School of Art and Design and graduated from IUPUI with a degree in interior design, said, “I rediscovered a passion for Lego when my nephew outgrew his Lego sets and they ended up unassembled in storage tubs. I began sorting through the storage tubs and seeing which of his old sets I could rebuild from scratch.”

“The monument is my first major build and was completed in March of 2018 for BrickWorld Indy,” Smythe added. Since the initial build, Smythe has tweaked the design and grouped different combinations of characters around the base of the monument to tell different visual stories and provide lots of opportunities for viewers to seek and find.

The sculpture will be decorated with lights for the holidays and can be viewed during the library’s regular operating hours. Please contact Suzanne Walker, Indiana Young Readers Center librarian, with any questions.