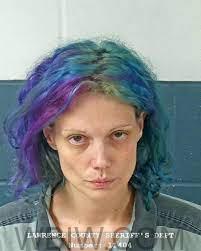 BEDFORD – Lawrence Superior Court I Judge John Plummer III sentenced Heather A. Blessing to 14 years in the Indiana Department of Correction after she admitted to dealing methamphetamine as a part of a negotiated plea agreement with the State of Indiana.

Blessing, 35, Unionville, pleaded guilty to dealing in methamphetamine, a Level 3 felony. The plea agreement states Blessing will serve a sentence of 14 years, all to be executed in the IDOC. As a part of the plea, the State dropped the additional charges of possession of methamphetamine, carrying a handgun without a license, resisting law enforcement, and obstruction of justice.

“This case eliminated more than 300 grams of crystal methamphetamine from the Lawrence County community,” said Lawrence County Deputy Prosecutor Ryne Koucouthakis. “We’re thankful for the officers who were involved in making this happen, and the Lawrence County criminal justice system for sending this offender to the Indiana Department of Correction. The safety of this community depends upon this kind of cooperation.”

Blessing was arrested on Jan. 5, 2021, by the Indiana State Police after detectives learned Blessing and Eric Flaherty were traveling to Louisville, Ky., to pick up a large amount of methamphetamine. An undercover ISP detective had also made two controlled purchases of methamphetamine from Blessing in the month leading up to her arrest. On the return trip from Louisville, troopers attempted to stop Blessing and Flaherty near the Orange-Lawrence County line. Blessing, who was driving, accelerated past the trooper, and stop sticks were deployed until the vehicle came to a stop on State Road 37 near Woodville Road in Mitchell. Blessing attempted to flee the vehicle but was apprehended.

The two were then taken into custody. Flaherty’s case is pending.