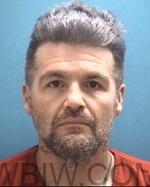 COLUMBUS – The father of 2-year-old Emma Sweet has been released from the hospital and is now being held in the Bartholomew County Jail on a 72-hour hold which started at 12:02 a.m. Monday.

The Bartholomew County Prosecutor’s Office says it has not brought charges against 39-year-old Jeremy Sweet as of Monday but continues to investigate Emma’s death.

The body of missing 2-year-old Emma Sweet was found in the White River on Sunday. Emma’s body was found around noon, submerged in a debris pile about a half of a mile from the location of where Emma’s cream color jacket with butterflies on it was found on Saturday, roughly two miles downstream from where her father’s truck was found.

Both Emma and Jeremy were reported missing on Thanksgiving Day by Emma’s mother. They were both last seen in Jeremy’s black pickup truck.

On Friday, November 26th, around 6 a.m. duck hunters discovered a truck partially submerged in the river off of a farm lane near the 1700 block of Blessing Road near Beatty Lane. Inside was Emma’s father, 39-year-old Jeremy Sweet, of Columbus, but his daughter was nowhere to be found. The area where the truck was found required going off-road, around barriers, and down a 15 to 20-foot embankment into the river.

Jeremy Sweet suffered exposure and hypothermia. He was taken to Columbus Regional Hospital for treatment.

Rescue workers searched all day Friday and Saturday, looking for Emma. Early Saturday morning, a jacket with butterflies that Emma was last seen wearing was found about a mile from where her father’s vehicle entered the river near Southern Crossing.

Bartholomew County Coroner Clayton Nolting ordered a forensic autopsy for Emma which was conducted on Monday afternoon in Columbus. Deputy Coroner Jay Frederick said that officials will wait to determine her cause of death until a thorough examination is completed, including toxicology tests which could take up to six weeks to get the results.