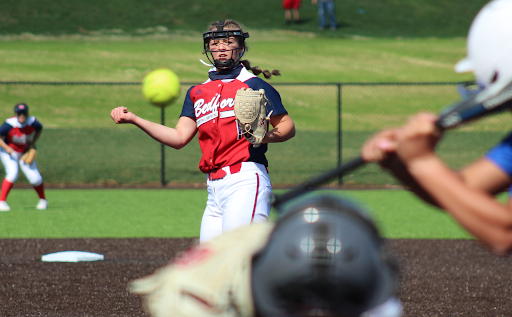 BEDFORD – Great pitchers do not grow on trees. They are dug out of the dirt, pitch after pitch, inning after inning. Bedford North Lawrence’s Annie Waggoner, who has played in the dirt all her life, will soon blossom into a mighty Sycamore.

Waggoner, BNL’s star junior hurler, ended her college recruitment, verbally committing to Indiana State. She will join Mike Perniciaro’s staff as one of the sparkling diamond pitching jewels in the 2023 class.

After missing her freshman season with the Stars (when the virus outbreak forced the cancellation of IHSAA spring sports), Waggoner was one of the stars as BNL went 28-5 and won a Class 4A regional in 2021. She went 20-2 in the circle with a dazzling 1.78 ERA (including 179 strikeouts), and she hit .404 with 8 home runs and 36 RBIs. While’s she dangerous at the plate, pitching is her passion.

“It’s more work, but there’s more reward,” Waggoner said. “I’ve always loved it. You can control the game that way.”

Waggoner selected the Sycamores for their close proximity, for the program’s feels-like-home environment.

“When I first visited, before I went to a camp or got to know the coaches, it was just me and my mom (Mindy) visiting the campus,” she explained. “I walked into the gym, saw the weight room, and told my mom ‘This feels like home. This feels familiar.’

“The coaches are awesome, it feels like a family environment. I’m just comfortable. It’s an awesome relief to make the decision. When you’re playing travel ball, you don’t worry about it in the moment, but in the back of your head it puts pressure on you. So it’s relief to have that out of the way. It’s been a dream of mine since I was young.”

Waggoner, a First Team All-Hoosier Hills Conference pick, comes from a diamond family. Her brother Evan, a standout catcher for the Stars and a South All-Star, now plays for the University of Evansville. She doesn’t mind the sibling comparisons. He was a source of motivation and experience during the recruiting process.

“He’s been awesome, not only on the field but off the field,” Annie said. “He was a role model. He was valedictorian, and just overall as a person.”

Waggoner’s goal now is to power BNL back to the upper levels of the IHSAA state tournament. BNL won a share of the Hoosier Hills Conference title (the first since 1998), claimed a sectional crown and added a regional championship (the first since 1997) before falling in the semistate semifinal. The Stars set records for wins and home runs.

“Just keep the team winning,” she said. “Even go to state, have a better run than we did last year.”