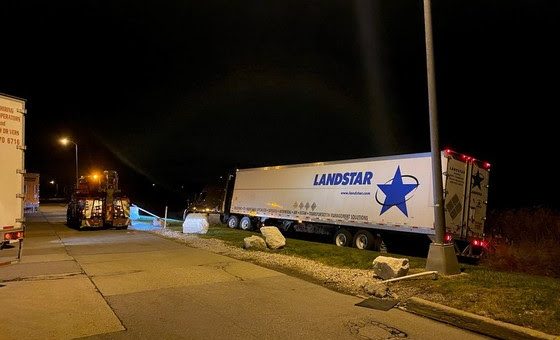 Trooper Fike pursued the Freightliner southbound on Interstate 65, where Cain avoided multiple sets of tire deflation devices before striking one at the 158 mile-marker. The pursuit continued to the 148 mile-marker, where the Freightliner exited Interstate 65 into the rest park and went off the road. Troopers on scene safely took Cain into custody. Cain showed signs of impairment and failed the field sobriety test. Further investigation revealed he had a blood alcohol content of .095%. After notifying the semi-truck company, troopers received information that Cain had stolen the Freightliner and the trailer. Cain was transported to Tippecanoe County Jail.

Cain is facing felony charges of unauthorized control of a vehicle, operating a vehicle while intoxicated with a prior conviction, possession of stolen property, and resisting law enforcement, and misdemeanor charges of aggressive driving, leaving the scene of an accident, OWI endangerment, and OWI